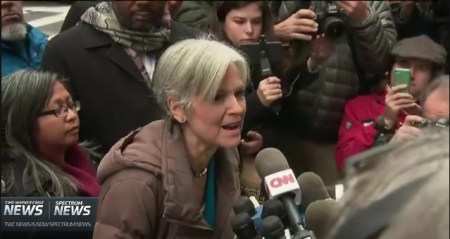 (Dec. 5, 2016) — On Monday morning, Green Party presidential candidate gave a press conference in front of Trump Tower in Midtown Manhattan explaining why she is pursuing “recounts” of the presidential election in the states of Wisconsin, Pennsylvania and Michigan.

Trump was declared the victor in the early hours of November 9 after Pennsylvania and Wisconsin were projected to award their electoral votes to him in a development which caught the mainstream media by surprise.  Michigan, although too close to call for more than two weeks, finished certifying its election results last Monday, awarding its 16 electoral votes to Trump.

Calling for “a democracy that serves all of us,” Stein claimed that there was an “undervote” numbering “75,000” in “communities of color” which could have resulted in “an erroneous counting of the vote.”

Stein said that if Trump believed in “democracy,” his representatives would not have filed actions to stop her recount efforts.

The U.S. was not founded as a a democracy, but rather, a constitutional, representative republic.

The press conference was not widely covered by the mainstream media.

In Pennsylvania, on Saturday evening, Stein unexpectedly withdrew a lawsuit “contesting” the November 8 presidential election results after objecting to paying the court-ordered $1 million bond to begin the process.  She has pressed her case to federal court in an effort to have Pennsylvania’s votes recounted.

Wisconsin is currently in its fifth day of a statewide recount for which Stein paid $3.5 million, while a federal judge ordered a full recount in Michigan to begin at noon Monday at taxpayer expense.

A lengthier video of the presser depicts a speaker emphasizing the alleged disenfrachisement of “poor people of color,” “immigrants,” and those who cannot legally vote.

Stein has not requested recounts in any states won by Democrat presidential candidate Hillary Clinton. The mainstream media has commented that the three states in which Stein has sought recounts have traditionally voted for a Democrat for president since 1988.

Stein did not win any states in the election.

The results of the Wisconsin recount thus far have shown a small increase in votes for Trump, while in Pennsylvania, the counting of absentee ballots appears to have reduced Trump’s lead by some 16,000+ votes.  The difference, however, is not enough to change the outcome of the state’s electoral votes or the national results.