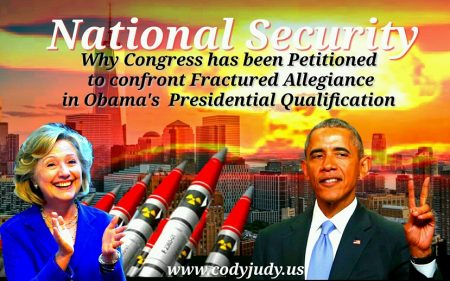 (Nov. 14, 2016) — The two document Petitions are quite explanatory to the U.S. House of Representatives and the U.S. Senate with the relevant Facts that Hillary Clinton as Secretary of State indeed had a Private Server that she and Barack Obama were communicating through to the chagrin in the accountability of FOIA. It has also been well established that Hillary Clinton had many Foreign States that were contributing heavily to the Clinton Charities with the expectations that she would in fact be the next President of the United States.

This lays open the door for Blackmail of profound magnitude towards the safety and security of our population and National Security. It’s just not enough for the good ole hand-shake and head nodd that Hillary Clinton and Barack Obama for that matter communicating with her using a pseudonym was only doing it as a matter of convenience, rather than a cloak of secrecy.

Of course no one else made the decisions to usurp the top Diplomatic Foreign Relation job and run for President. Barack Obama campaigned for Hillary Clinton and we noticed that he remarked his “Legacy” Depended on her winning.

There is just too great a chance that with the fractured allegiance, the fractured intelligence, and the fractured national security that Americans could be the ones that will pay the high price and that is why Congress must in the next week consider the two following petitions and revoke Obama’s security clearances and appoint a President in the Interim.

The failure to do so, represents a blatant disregard for Americans’ welfare, safety, and the National Security of the whole Country. We have already witnessed Top Secret material at the highest level noticed as compromised. With the Election results completely surprising Democrats and the violent organization of protest amounting to riots smashing shops and even gun violence escalating the fracture, the American Congress cannot sit idly by and watch; hoping the ‘set up’ and ‘black mail’ possibilities resulting in promises that now remain unfulfilled due to Hillary Clinton’s loss and the connections to Foreign Governments through the Clinton Charities will just go away.

The danger of domestic and foreign retaliations in blackmailing the United States Government are at an all time high and we simply cannot afford any lose ends. Congress must move to suspend Barack Hussein Obama’s defacto Presidency now or run the risk of being blamed for excusing criminal action by criminal cover up and the compromise of the U.S. Constitution.

Petitions to Congress Mark National Security Breach Fractured in the Interim of the Office of President added on Monday, November 14, 2016