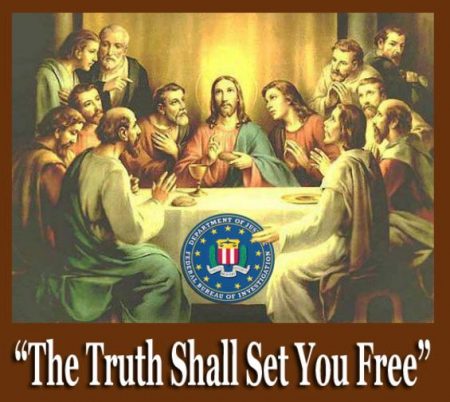 (Oct. 17, 2016) — The hour is late and time is of the essence.  They obviously have their well-oiled plan in place and ready to be implemented. And, as you will see, we too have a plan for “defending freedom in its maximum hour of danger.”  Please note the author of this quote is also a main player in The Plan. I have laid out The Plan here which will take only one very courageous FBI Investigator to read and convince eleven others for safety in numbers, and then to act upon it.

Before reading this, I am sure you already know exactly who the other 11 agents are. But, as you review this plan, please do not brush this off as some foolish coincidence, for He has offered His Hand where you hold one of the only Trump Cards, and you know it.

In order to set the stage, we first need to look into the similarities of a another well-known robber baron, where anyone who makes his living as a professional investigator would know to first consider his famous law-of-logic, which became known as Sutton’s Law. And, thanks to him, even a rookie investigator would first consider the simplest, most obvious evidence to clear his case. The law I refer to here is named after the bank robber Willie Sutton, who reputedly replied to a reporter’s inquiry as to why he robbed banks by saying, “because that’s where the money is.”

Which brings us to Clinton’s Law, which states that whenever you find yourself under investigation, you should blatantly lie with no remorse or concern for the truth, and then when that lie is uncovered, deny, deny, deny, and compound it with other lies until one of the them sticks; then create a distraction, blame your enemy and change the subject. And, repeat as many times as necessary.

Coincidentally, while in her private self, Hillary reputedly replied to a friendly reporter’s inquiry as to why she and her husband Bill robbed the American People by saying, “because that’s where the money is.” But, please note that the major difference in Mr. Sutton’s methods compared to that of the Clintons is that Willie did not need to coerce others to rob banks for him, as Bill and Hillary did; lie for them, that is.

I recently read how the Clintons would use the communists’ tactic of lying and then entangling others to become complicit in their evil schemes. The conclusion stated “that the purpose of communist propaganda was not to persuade or convince, nor to inform, but to humiliate; and therefore, the less [the lie] corresponded to reality – the better!”

It went on to say that “when people are forced to remain silent (as you FBI Investigators find yourselves today), when you are being told the most obvious lies, or even worse when you are forced to repeat the lies themselves, they lose once and for all their sense of probity. To assent to obvious lies is to cooperate with evil, and in some [not so] small way, to become evil oneself. One’s standing to resist anything is thus eroded, and even destroyed.”

A society and its Federal Law Enforcement Officers, with nothing but emasculated liars, is easy to control. We were told that there were 147 FBI Investigators and/or Attorneys assigned to the Hillary Clinton email investigation and above asked for at least 12 of you, where you could be like the Dirty Dozen and, while praying at mass this morning, I considered another 12 who were known as the Apostles of Jesus Christ.

Before you read the plan please know that none of us knows today who you are, but I know better than most with my background in law enforcement.  More importantly, my uncle DFG was once, like you, a proud FBI Agent. We realize that this will take an enormous amount of courage; but your wives, your sons, and your daughters know who you are, and we are all, including my uncle, counting on you to stand up for the truth.

Forget the polls.  Forget the corrupt media, they will never tell your story.  Forget the useless Confidentiality Agreement you were coerced to sign. You know that the complicit Washington establishment of both parties must make sure that Trump loses in order to hide from the truth, and will, therefore, do anything and everything in their power to stop him. Once their fraudulent voter machine kicks into high gear, there will be no second chance, and the United States of America, as you and I know it, will be gone forever. This plan is the only way to stop them.

The Plan!
1. You need to pray to God for the courage required to act on this plan and then pray, pray, pray – that this plan works.
2. The American Citizens must know that Director James Comey has been lying and continues to lie to protect Hillary Clinton.
3. Discuss it with 11 other Agents, to include the counsel of at least one Attorney, who was also assigned to the Clinton email investigation.
4. Covertly come together.
5. Then face the reality that each of you will need to write a letter of resignation from the Bureau.  You must believe in your heart that you will be doing the right thing,  that you will be a better man/woman for it, and you will always have the gratitude of every American-loving citizen and of course President Donald Trump himself.
6. Reach out to Judge Andrew Napolitano at Fox News and schedule a meeting. You may/may not know of him, but he is a man who can be trusted, and to establish a sense of comfort, know that he may well have been speaking directly to you when the Judge concluded one of his speeches with:

“In the history of the world, only a few generations have been granted the role of defending freedom in its maximum hour of danger. We ARE that generation! This is your role. Now is the time! Freedom MUST be defended.”

7. The sole purpose of the meeting with the Judge is to schedule a televised interview with Sean Hannity. It has become quite obvious lately that Mr. Hannity has been ‘interviewing’ to be Donald Trump’s Press Secretary, and your soon-to-be-infamous interview will, as you might imagine, ice it for him and you, simultaneously.

There is little-to-no need to contact or mention me, for I am only one American citizen who loves his country. Please know that I do not scare easily, but know in my heart that if Hillary Clinton is elected POTUS on November 8th – Evil will have won!

And, let me close with the food-for-thought quotes of two other famous men:
“There are three things that cannot long stay hidden: the sun, the moon, and the truth” – Buddha
“And, the truth will set you free.” – Jesus Christ

Editor’s Note:
Dear TPATH readers and patriots,
What Mr. Lowe is proposing here, if it could come to fruition, would be a game-changer.  We understand that putting one’s FBI career in jeopardy will be a very treacherous step which will require enormous courage and integrity.  Mr. Lowe, a retired and decorated law enforcement servant of the people for many years, believes there are FBI agents willing to take on this burden. They just need to know that there is a way for them to do it.

At this time I am asking anyone out there who might have an email address for Hannity, Pirro or Nepalitano to please contact Mr. Lowe here:

Please understand that what is needed is an email address that they will see.  In other words, one that you have been given and have successfully used.  The addresses FOX puts on the various websites are never answered.  So if you can help, please let Fredy know.

Also, if you are reading this and you are an active FBI agent who knows things about Hillary or if you were actually involved in the investigation and would like to know more, please contact Mr. Fredy Lowe at the email above.