FROM “THE CONSTITUTIONAL MEANING OF ‘NATURAL BORN CITIZEN'” 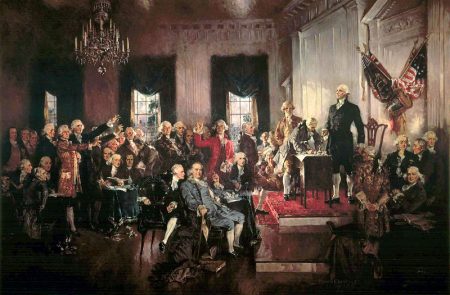 There is no denying the fact that a person born in the United States could have multiple nationalities, and owe allegiance to multiple sovereigns, since either parent could have multiple citizenships, any of which could by the law of that nation transfer to the child by the principle of jus sanguinis. Many nations claim anyone with at least one parent (sometimes it must be the father, sometimes it must be the mother, sometimes both) who is a citizen or subject of that nation as a citizen/subject also. However, if both your parents are citizens (or subjects) of the same sovereign, if neither parent has any foreign citizenship, and if you were born in that same sovereign’s territory, then and only then is it impossible for any other sovereign to have a birthright claim to your allegiance under the law of nations as commonly understood.

Therefore, it should be evident that if the purpose of the requirement to be a “natural born citizen” is to prevent anyone with foreign citizenship from serving as President, it cannot achieve that end unless, by definition, the phrase “natural born citizen” excludes anyone who might have acquired foreign citizenship by means of any one of the three modalities recognized by the law of nations: 1) jus soli (born on foreign soil), 2) jus sanguinis (born to a parent with foreign citizenship), or 3) naturalization by a foreign country. John Jay’s request to Washington makes no sense otherwise, since in that case his suggested eligibility requirement would not preclude what he was seeking to prevent.

It should be noted that a person can become a citizen or subject of a foreign country by naturalization after one has has been born. To be logically consistent with the intent of the Founders, those US citizens—even if born in the US to parents who were both US citizens—who have any foreign citizenship, no matter when or how acquired, should not be eligible to be President. This issue has nothing to do with race or ethnicity. It’s a question of loyalty and avoidance of even the appearance of conflict of interest. Nothing more, and nothing less.

Consider again Article II, section 1, pa. 5: “No Person except a natural born Citizen, or a Citizen of the United States, at the time of the Adoption of this Constitution, shall be eligible to the Office of President; neither shall any Person be eligible to that Office who shall not have attained to the Age of thirty five Years, and been fourteen Years a Resident within the United States.”

That clause limits who may be President to persons who meet the following requirements:

Before answering that question, consider the case of Congressman Smith. He was born in South Carolina before the American Revolution. At the time of the Revolution, he was not yet an adult. His parents were British loyalists, and fought against the Revolution. But after the Revolution and the adoption of the Constitution in 1788, he was elected to Congress. But his right to be seated was challenged on the basis that he was not a citizen, due to the actions of his parents.

James Madison himself spoke in defense of the fact that Mr. Smith was a citizen. The reasoning he used is decisive with respect to understanding the reason for the exception in the Constitution to the “natural born citizen” requirement.