IN FAVOR OF NEW ARRIVALS

(Sep. 6, 2016) — An inmate at the Trousdale Turner Correctional Center (TTCC) in Hartsville, TN reported through a letter received on Tuesday that despite his having arrived at the facility in late April as a minimum-security prisoner eager to work and with a history of good behavior has been bypassed for an anticipated move to the “W. Building,” known as the “Honor pod.”

“I’ve been bypassed-skipped-over looked on every move they have made to W. Building,” he wrote in his letter dated August 31. “Now tell me how in anyones [sic] world is it fair or right to take people who just got here, who are new to the system and haven’t worked and earned a spot in W. Building before us who have stayed out of trouble for eight years seven months and 26 days for me.”

As The Post & Email has been reporting since early May, TTCC has been beset with problems, perhaps of its own making when it opened its doors in January with severe understaffing and no customary systems in place to accommodate the more than 1,500 prisoners believed to be housed there presently.

Many relatives and inmates had said that while previous prisons had been thought to be substandard, dangerous and unresponsive to prisoners’ needs, the Trousdale facility, privately-owned-and-operated by Corrections Corporation of America (CCA), is far worse.

A letter received from a different inmate approximately two weeks ago related that gang members have received preference for jobs over other inmates who do not pose a risk to others.  On September 3, we were told by an inmate’s relative who had visited the prison that day that gang members “jumped and beat” another inmate to steal a new pair of shoes he had received through the prison delivery system.

TTCC inmates who have written to The Post & Email have reported almost-continuous lockdown conditions which keep them in solitary confinement for the sole reason that control over the facility is nonexistent. Gang members are said to be completing the nightly lockdown process, and as many as ten inmates may have died in situations that remain unreported.

Most of the inmates relocated to TTCC in the spring and over the summer had been employed at their respective previous facilities, something on which they rely for funds to purchase stamps, writing materials, telephone time with loved ones, and amenities from the commissary. Many have described dire hygienic conditions, with the relative of an inmate reporting on Tuesday evening that the plumbing in one of the bathrooms was blocked, creating a nightmarish health hazard.

CCA will not respond to inquiries from this publication, and a conversation two weeks ago with Tennessee Department of Correction (TDOC) Communications Director Neysa Taylor resulted in Taylor’s denial of the problems reported from many directions.  Taylor did not respond to a follow-up email in which we directed her to several mainstream media reports as well as our own reportage and documentation surrounding the Trousdale facility.

Portions of the inmate’s letter on the topic follow. 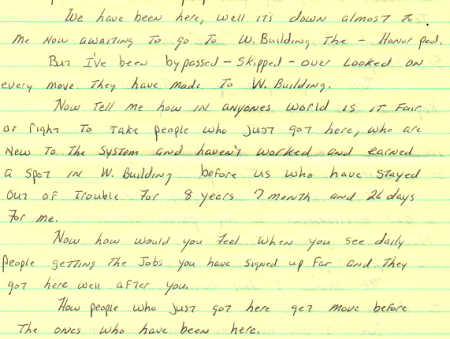 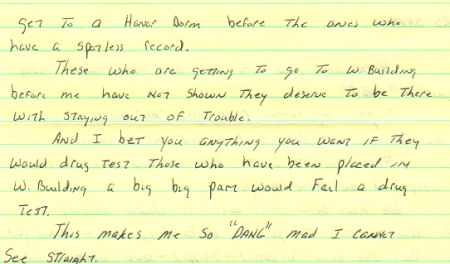