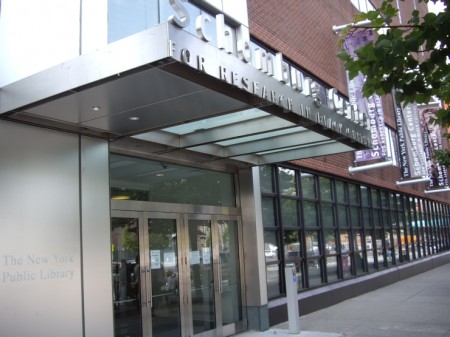 (Jul. 16, 2016) — On June 18, The New York Times published an article by Rachel L. Swarns depicting a collection of letters and financial aid requests written by Barack Hussein Obama Sr., maintained at the Schomburg Center for Research in Black Culture, a division of the New York Public Library.

On June 20, The Post & Email submitted a request to the library to see the letter collection, if possible, and to interview the archivist Swarns named in her article, Christine McKay, about its origins.

On June 21, we received a response from A.J. Muhammad, Librarian, who referred our inquiry to the Manuscripts, Archives and Rare Books Division of the Schomburg Center.  “…the letters are contained in the Phelps-Stokes Collection,” Muhammad told us.

The Phelps Stokes Fund, a 501(c)3 charity, was founded in 1911 after the younger daughter of a wealthy New York City family, Caroline Phelps Stokes, willed her estate to the creation of an endowment to improve education and housing for the poor, particularly Africans, African-Americans, and American Indians.  Caroline’s sister Olivia, who lived until 1927, was active in maintaining the fund and its work.

Letters, wills and other papers of the Phelps Stokes sisters are maintained at the Radcliffe Institute for Advanced Study at Harvard University, while documents associated with the fund are held by Schomburg.

The Phelps Stokes website appears to have been taken down as of this writing.

In her article, Swarns stated that the elder Obama’s “letters would help change the course of American history.” Of the university student from Kenya, she wrote, “His name was Barack Hussein Obama, and his dispatches helped unleash a stream of scholarship money that carried him from Kenya to the United States. There, he fathered the child who would become the nation’s first black president, only to vanish from his son’s life a few years after his birth.”

While several of the letters exhibited by Swarns show that Obama applied to the African-American Institute for funding, he later applied to the Phelps Stokes Fund in a November 28, 1962 letter in which he wrote, “…So far I have completely no funds for the second semester.  I do not even have anywhere to run to except for you…”

On page 25 of 55 in documents released to Heather Smathers several years ago in response to a Freedom of Information Act (FOIA) request, it is stated that Barack Hussein Obama of Kenya received money from the “Phelps Stokes Fund” at Harvard University as his “means and source of support while in the United States.”  Page 30 indicates three sources of funding, with Phelps Stokes providing $1,000 for a year of study in Cambridge.

Two different years of Obama’s birth, 1934 and 1936, are provided in handwriting on the forms.  According to his biography, he had multiple simultaneous marriages, which is illegal in the United States.

Both Corsi and Swarns noted that Obama did not state that he had an American wife and child to support in making his financial aid applications to attend Harvard following his studies at the University of Hawaii.  However, on an application to extend his visa dated August 17, 1962 indicating it was completed in Baltimore, MD, Obama said he was “married” and provided the name of “Roy Obama” as his child without giving his wife’s name (p. 27).

His Kenyan wife, who did not accompany him to the U.S., was named Kezia.

However, on August 31, 1961, an application for Obama to accept employment as an “alien student” indicated that he was married to “Ann S. Dunham,” providing only an address of “Honolulu, Hawaii” for her.

On page 34 of the Smathers documents, a handwritten report by an immigration official states of Obama, “USC spouse to go to Wash State University next semester.  When finished school he plans to go to a mainland school for a Doctor Degree in Economics — after that to return to Kenya.  They have one child born Honolulu on 8/4/1961 — Barack Obama II, child living with mother (she lives with her parents + subject resides at 1482 Alencastre St.).

Swarns wrote in her article that the existence of the Obama Student File was discovered in 2013 and that Obama was made aware of it:

In 2013, the Schomburg Center invited President Obama to see the newly discovered documents, which included nearly two dozen of his father’s letters, his transcripts from the University of Hawaii and Harvard University, and references from professors, advisers and supporters. Nearly three years later, as Mr. Obama celebrates his last Father’s Day in the White House, the center is still waiting for a response.

On June 29, in response to its request to see the letters, The Post & Email received an email from Steven Fullwood, Associate Curator of the Schomburg Center, who told us that “The Obama Sr. student file (not a box) is available to researchers at the Schomburg Center” and that “Christine McKay, the staff member who was interviewed in the New York Times article about the Obama Sr. student file, has retired.”

We thanked Fullwood for his response and asked, “Is there someone, perhaps Ms. McKay’s replacement, who could answer some questions as to how the documents were located, compiled, by whom, and when they became available to the public?”

Unfortunately, Ms. McKay was not replaced. The decision to make the material public was Dr. Khalil Muhammad’s, former director of the Schomburg. That’s basically all I can tell you about the material.

You can make an appointment to review research copies of the materials (photocopies). Due to their high value and fragility, the original materials are not available to researchers. Your option is to contact Adenike Olanrewaju at adenikeolanrewaju@nypl.org who handles press inquiries for the Schomburg. Ms. Olanrewaju can assist you with your press inquiry.

If you simply like to research the collection, please schedule an appointment by following this link.

Fullwood also informed us that Dr. Khalil Muhammad has since left the directorship of the Schomburg.

At 8:12 EDT on July 13, The Post & Email inquired of Swarns through a contact form at The New York Times:

were you actually able to go to the Schomburg Center to view the letters?  I have not been able to obtain an appointment or speak to the media person to whom I was directed.

Would you by chance be able to put me in touch with Christine McKay?

Thanks for getting in touch. Your email didn’t indicate your name or who you work for?

Oh, I’m sorry.  I filled out the form once with that info and it didn’t go through, so I did it again, evidently omitting it inadvertently.

I own and operate a small internet newspaper, The Post & Email, which reports on government corruption.

No further response from Swarns has been received.

Hello, I was referred to you by Steven Fullwood of the library.

I am planning on writing an article about the Obama Sr. letter collection reported by The NYT on June 18:

I am told that the archivist who discovered the letters, Christine McKay, has retired and not been replaced.

Would you be able to answer a few questions about the collection such as how they were compiled, from where, who was involved, etc.?

We did not receive a response from Olanrewaju and therefore recontacted Fullwood:

Good morning, Mr. Fullwood, sorry to bother you again, but I am looking for the Barack Obama letter collection in an online archive and cannot locate it.

Here is where I have looked under the search term “Barack Obama” and not found it:

Strangely, many items came up which do not contain those two words at all.

I reached out to the media person twice but have not heard back.  Might she be on vacation?

I do not know if Ms. Olanrewaju is on vacation, as she only spends part of her time at the Schomburg and the rest at the 42nd Street Library. I have cc’d her on this correspondence.

Have a good day.

We thanked Fullwood for his response, then received an email from Olanrewaju, which reads:

Thanks for getting in touch. I see you’ve been in contact with Steven Fullwood, who’d be the best person to speak with about this.

Do you have any additional questions? Certainly let me know and I’ll be sure to get you what you need.

Thank you, but he said you were the media contact for the Schomburg Center and that you could answer some questions about the Barack Obama Student File.

At this writing we have received no other response from Olanrewaju.

The Post & Email then resubmitted its request to view the Student File in person during the month of August, to which we received the following response:

The Obama Letters are onsite and available for your use. Researchers are restricted the facsimiles of the originals only.

At this time we have available appointments in August. Please let us know when you would like to come in. Due to space limitations, researchers are advised to make their appointments as early as possible. Once your appointment is made we will send you a confirmation email.

We are honored to be an IMLS National Medal winner!
Learn more about the prestigious award here!

The Post & Email is in the process of firming up a date with two colleagues which, once set, will be conveyed to Schomburg Archives for an appointment request.

Why the Silence Over the Barack Obama Sr. Student File? added on Saturday, July 16, 2016

3 Responses to "Why the Silence Over the Barack Obama Sr. Student File?"