Report: Correction System “in the Business of Holding People”

“THEY GET KICKBACKS ON EVERYTHING THAT THEY DO”

(Apr. 30, 2016) — In a recent telephone conversation with a Tennessee state prison inmate, The Post & Email was told that the Tennessee Department of Correction (TDOC), enabled by the state Board of Parole, is “in the business of holding people” for as long as possible regardless of the sentence handed down by a judge.

According to its website, the Tennessee Board of Parole “is an independent agency…composed of seven members who are appointed by the Governor. Member terms last six years and may be renewed upon the Governor’s recommendation.”

The Board comprises nine divisions, one of which is “Board Operations,” which in turn has five units of its own.

A 2012 audit of the Board of Probation and Parole, as it was called at the time, indicated that “In recent years, the Field Services Division has been working with the Department of Correction (TDOC) on a Joint Offender Management Plan to cut expenses, increase offender accountability, and effectively manage the offender population without forced early releases.”

In one of its conclusions, the report states that the Board of Parole and TDOC “should work together to ensure that appropriate edit checks and data validation tools are developed and implemented for TOMIS,” the electronic system used to track inmates while in the custody of the TDOC or under the supervision of the Parole Board.

“They need to do away with the Board of Parole, where they get to play judge and jury all over again,” the inmate said.

All current Board members have been serving since 2013 or later.

Offenders who are paroled must pay monthly fees “to offset the cost of offender supervision.”  According to the TDOC, the fees “may be used for funding of personnel, training of agency staff, purchasing agency equipment and providing treatment for offenders.”

Of prison conditions, the inmate told us, “I have to agree with what Paul Harvey said:  ‘If you want to see the scum of the earth, come to a prison shift change.'” Speaking of correction officers, he said, “Most of them want to be officers – cops or state troopers – and the majority, believe it or not, seem like they want to punish us.  Our punishment is being here.  They want to come in here and make things harder.  Their job is security, not to make things harder.  Some of them talk to you like a dog; there’s no sense in that.”

During the conversation, the issue of poor working conditions for correction officers arose, over which hearings were held by subcommittees of the Tennessee legislature last summer.  Violence from gang activity in the state’s prisons is a factor in the safety, or lack thereof, of both officers and inmates.

TDOC inmate Walter Francis Fitzpatrick, III, who is serving a three-year sentence on convictions of “aggravated perjury” and “extortion” in June 2014, last year identified a “prisoners-for-profit” operation within the Northwest Correctional Complex (NWCX) generated by the participation of inmates, regardless of whether or not they are in possession of the ability or requisite background, in the “Pro-Social Life Skills” (PSLS) course.  Both Fitzpatrick and inmate Jerome L. Johnson were threatened with punishment for having refused to enroll in the class based on their claim that answering the workbook questions would force them to self-incriminate.

“They get a kickback on Union Supply (company which supplies inmate clothing); they get a kickback on commissary; they get kickbacks on everything that they do,” the inmate said.  “On the Pro-Social and other classes, if your points are below a certain level, you’re not even supposed to be tapped to participate, but they’re tapping everybody because they’re getting a kickback.”

He then related a story alleging that “In 2000, I was lied on, and I proved I was lied on.  That’s when the court clerk altered official court documents, and I asked her, ‘Are you aware that you committed a Class C felony?’ and she said, ‘Well, General XXXXX told me to,'” meaning the District Attorney General.  “She altered official court documents saying that I didn’t appeal my case.  In three cases, she whited them out to make it look like I didn’t so they could sentence me and keep my parole violated.  Then I lost my mom, my shop, my wife; I lost everything.”

The inmate has sent The Post & Email considerable documentation showing that he should have been sentenced to nine years in prison and instead received 30 years from consecutive, rather than concurrent, sentences. He has served 22 years in prison and is scheduled to be paroled after serving another 17 years for conviction of a non-violent crime.

Over more than six years, The Post & Email has exposed Tennessee’s corrupt grand jury system which allows judges to appoint their own grand jury foreman from outside of the empaneled jury pool without any formal vetting process.

He filed a habeas corpus petition in 2004 and earlier this year asked the Appellate Court to locate it.  An invoice dated February 3, 2016 indicates that the inmate was billed $58.00 despite the notation that “No records were found.” 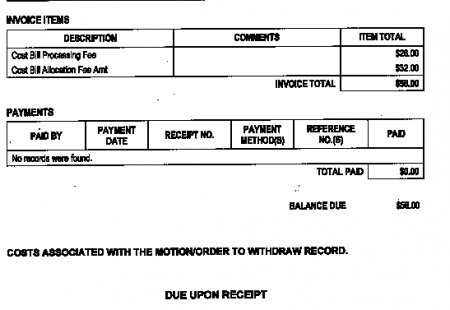 The inmate’s attorney has declined to speak with us about his case.

A hearing on the “illegal sentence” the inmate said he has already served was held in November, with a decision expected from the judge by mid-December but not yet rendered.

In one of many letters The Post & Email has received, the inmate included a chart illustrating how “consecutive” sentences add more years to an inmate’s sentence than the sentence pronounced by the judge in the case. Report: Correction System “in the Business of Holding People” added on Saturday, April 30, 2016

One Response to "Report: Correction System “in the Business of Holding People”"