COMMITTEE CHAIRMEN CHASTISE OBAMA FOR LACK OF “TRANSPARENCY”…BUT WHAT ROLE DID THEY PLAY IN AMERICA’S NATIONAL NIGHTMARE? 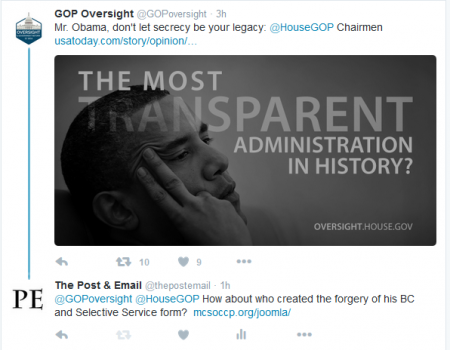 In response to Oversight’s tweet, The Post & Email wrote, “How about who created the forgery of his BC and Selective Service form?” with a link to the Maricopa County, AZ Cold Case Posse‘s website.

In September 2011, the Cold Case Posse (CCP) undertook a criminal investigation of the long-form birth certificate image released by the White House on April 27 of that year which was said to be a scan of a certified copy of Obama’s original birth record from Hawaii.

At a second press conference on July 17, 2012, Arpaio and Zullo provided greater detail as to how their conclusions were reached and declared that the standard of probable cause had been surpassed in regard to the forgery of the birth certificate.

The press attacked the messengers and failed to investigate.  Despite Arpaio’s entreaty to Congress to launch its own investigation, the birth certificate image was allowed to stand and remains on the White House website today.

Zullo later stated that the birth certificate is “the foundational lie of this presidency” and that it was produced “with the intent to deceive.”

In their Tuesday editorial, the House committee chairmen decried that Obama had “vowed to run ‘the most transparent administration in history'” when he took office on January 20, 2009.  “At nearly every turn, this administration has blocked public disclosure and ignored almost every law intended to ensure open and accountable government,” the congressmen wrote.

Citing the private server used by Hillary Clinton while she was Secretary of State under Obama; a fraudulent email address used by former EPA Administrator Lisa Jackson; and a high percentage of FOIA requests which were refused or stonewalled, the committee chairmen then contended that “It is the job of Congress and our agency watchdogs to ensure the federal government is efficient, effective and accountable to the American people. But time and time again, this administration has dismissed Americans’ right to know.”

When millions of Americans demanded to “know” who “Barack Hussein Obama” was and why he had released no documentation about himself, the 110th Congress and its successors refused to provide meaningful responses and action despite Obama’s aliases, sketchy and inconsistent life story, and obfuscation of much of the events of his life.

As a result of the investigation, Zullo has described Obama’s first book, “Dreams From My Father,” as one about “a life that was never lived.”

Despite growing evidence of an imposter in the White House, not one member of the House of Representatives or Senate attempted to discover why a Selective Service registration form bearing Obama’s name had to be created after the fact to be sent to FOIA requesters, nor why neither of Obama’s purported “birth certificates” lacked official seals.  In a surreal type of crime drama, beginning in 2007, when Obama declared his candidacy, the media walked in lockstep with him to dampen any curiosity about his background and stifle all discussion of the fraud displayed for all to see.

The primary tool utilized was one of ridicule and scorn.  Certainly, no one in Congress wanted to be called “a birther.”

Despite the Obama regime’s unwillingness to turn over requested documents, the congressmen who authored the article admitted that “it’s Congress’ job to get answers.”

And about that, they are correct.

“But Congress cannot do its job when an administration refuses to turn over information. That’s why Congress has increasingly resorted to the power of the pen and has issued numerous legally-binding subpoenas to various Obama Administration agencies, including the Department of Justice, the State Department, the Treasury Department, the Department of Homeland Security, the Federal Reserve Board, the Federal Reserve Bank of New York, the Environmental Protection Agency, the National Oceanic and Atmospheric Administration and the Office of Management and Budget, among others,” the six chairmen wrote.

Then why haven’t they issued subpoenas for Obama’s original records from Hawaii, if they exist, or for his college applications, passport documentation, school records, and other documents which might reveal who and what he is and whether or not he was ever constitutionally eligible to occupy the Oval Office?

Of the 535 members of Congress, up until recently, four — Sen. Marco Rubio, Sen. Ted Cruz, Sen. Lindsay Graham, and Sen. Rand Paul — were seeking to become Obama’s successor. As Graham  and Paul have left the race, Rubio and Cruz remain, although among a rising concern that they do not meet the constitutional qualifications to serve in that capacity as “natural born Citizens.”  How can such men be trusted to honor the position of the nation’s chief executive when they have failed to discover how someone with fraudulent credentials has usurped and abused it for the last seven years?

Had the root problem been investigated following the 2008 election, Hillary’s private server over which top-secret information was carelessly transmitted; the fake EPA and other executive-department email addresses, the four Americans killed in Benghazi, Libya on September 11, 2012; the tens of thousands of Americans who have lost jobs because of Obama’s decimation of the fossil-fuel industry; the admission of unvetted Islamics to the country whose counterparts are raping and killing Europeans in record numbers and who have killed more Americans in the last seven years than in the eight years following 9/11; the instability of the Middle East brought about by what are likely nefarious intentions on the part of Obama and his cohorts; and the emasculated mockery our military has become would not have occurred.

An untold number of American lives could have been saved had Obama’s myopic and preposterous Rules of Engagement never become a reality.

We would not have been told the lie that “Islam Has Been Woven Into the Fabric of Our Country Since Its Founding.”

We would not have had to hear the words, “What difference does it make?” in response to the murder of four Americans, one of them a U.S. ambassador, at the hands of Islamic terrorists, covered up by a regime which cared only about remaining in power by continuing to deceive the people.

“This administration has created an unprecedented culture of secrecy that starts at the top and extends into almost every agency. While Congress is being thwarted in its efforts at oversight, it is really the American people who lose when those entrusted to enforce the law believe and act as if they are above it. It’s time to come clean, Mr. President. Don’t let a lack of transparency be your legacy,” the sextet concluded their article.

Well, gentlemen, where have you been for the last seven years as a foreigner – at least in heart and mind, if not by birth and parentage – has decimated our military, waged unprecedented class warfare, spied on journalists, used taxpayer money to harass groups of Americans he doesn’t like, and spent hundreds of millions of dollars on vacations and junkets while average Americans struggle to feed themselves?

Your words chastising Obama – or whatever his name is – ring hollow.  Instead, why are you not saying to one another, “It’s time to find out how our country was hijacked by the biggest charlatan in U.S. history?  Let’s not let ‘a lack of transparency’ keep us from doing the right thing for the American people and the country we love.”

Congress, you do have the power of the pen.  This writer and many others believe that indeed, “It’s time to come clean,” sign some subpoenas for Obama’s records, and carry out your mission until the truth is revealed.

Instead of unrealistically demanding that Obama “come clean,” it’s time for you to do it.  That would be real “transparency.”

For without that, you are as much a fraud as he is and do not deserve to represent us.

November is coming, and so are we.

Who in Congress Deserves to Return? added on Tuesday, February 9, 2016