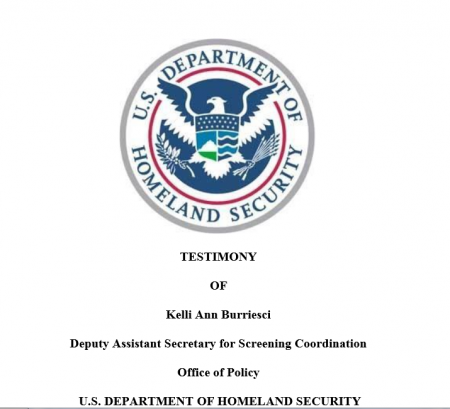 During the week of January 18, 2016, a  long-awaited report was sent to Congress by the Department of Homeland Security (DHS), confirming that Visa Overstays are a significant source of illegal immigration.  The report was published just in time to provide clarity on the issue for the Senate Judiciary Committee hearing held on January 20, 2016. DHS’s Center for Immigration Studies analysis concluded that additional resources must be directed toward deterring and removing overstays. Only 3% of ICE Enforcement resources are dedicated to address and enforce the departure of Visa Overstays.

“If we do not track and enforce departures, then we have open borders. It’s as simple as that,” said Senator Jeff Sessions (R-AL), who questioned Department of Homeland Security officials at a Senate Judiciary Subcommittee hearing on Immigration on January 20th. “There is no border at all if you don’t enforce our visa rules” said Senator Sessions.

Jessica Vaughan, Director of the Center for Immigration Studies, stated, “Lawmakers and the public should be tremendously concerned that DHS identified 482,781 foreign visitors who did not depart in 2015 as required by Federal Immigration Laws, and those Visa Overstays apparently joined the huge population of illegal aliens in the United States. More than 12,000 of the Visa Overstays came from countries associated with terrorism. Clearly, our immigration controls are not sufficient to protect Americans. Those violations of Federal Immigration Laws are encouraged by the Obama administration’s appalling neglect of interior enforcement and overly generous visa policies.”

According to a new report from the US Border Patrol, 482,781 individuals who entered the US on tourist or business visas were still believed to be illegally present in the United States at the end of FY 2015.  A review of the report revealed that B-Visa Overstays were from the following predominantly Muslim countries: 219 from Afghanistan, 681 from Iraq, 564 from Iran, 1,397 from Jordan, 913 from Kuwait, 56 from Libya, 1,435 from Pakistan, 440 from Syria, 965 from Saudi Arabia, 2,227 from Turkey, 219 from Yemen, and 6,781 overstays from Nigeria, half of whom are Muslims.  DHS does not know how many of the roughly 157,000 foreign students from predominantly Muslim countries have overstayed their visas.  In 2014, ABC News discovered that 58,000 foreign nationals had overstayed their student visas, of which 6,000 represented a “heightened concern.” Again, those numbers only include foreign students.

The report identified just over 527,000 foreign visitors who apparently did not depart as required when their authorized stays expired in 2015. Approximately 482,781 were presumed to still be in the United States at the end of 2015, and 416,500 had not departed as of January 4, 2016.

The Center’s analysis of the DHS complete report can be viewed by clicking on the link: http://www.cis.org/vaughan/dhs-reports-huge-number-visitors-overstayed-2015

DHS did not examine the records of visitors who entered by land, which is more than three-quarters of all admissions to the United States. Nor did it track the records of visitors granted visas for purposes other than business or pleasure, such as students, guest workers, or exchange visitors. These categories represent a smaller share of all annual arrivals, but still account for several million admissions per year. Some of those visitor categories have been found to have significant Visa Overstay and status violation rates in the past and have been exploited by terrorists.

Despite a total estimated population of 4-5.5 million Visa Overstays in the United States, only about 8,000 are removed annually by the Obama appointees at DHS; for the most part they look the other way.

Over the last seven years, Obama’s appointees at DHS have long sought to suppress the above-listed Visa Overstay information instead of controlling and preventing the entry of illegal aliens.  Obama’s DHS has turned into an agency that supports and turns a blind eye toward illegal immigration and Visa Overstays. The report was only released in January 2016 because the massive $1.2 trillion Omnibus Spending Bill passed by the Republican Leadership in Congress in December 2015 included a provision that would have withheld $13 million from the DHS Secretary’s Office if the report was not released to Congress by January 19. Without that threat, the Congress would never have received the information on Visa Overstays noted above.

The State Department learned that 9,500 Middle East Muslim entrants who they issued entry visas to the United States had terrorist ties, then after issuing the visas, they revoked those visas because they realized they had terrorist ties. But when they realized those entrants had terrorist ties, the State Department had no idea where those entrants with terrorist ties were, and couldn’t evict them–they therefore covered it up!!   Those 9,500 entrants with terrorist ties are now Visa Overstays.  The FBI is specifically concerned with those 9,500 Visa Overstays and about the new American citizens admitted through Obama’s Fast-Track citizenship program for Middle Eastern and African UN Muslim Refugees who flew to Iraq and Africa to train and fight with the ISIS terrorists to kill Christians.  They are now freely returning to the US and not being arrested, charged with terrorism, having their passports withheld, and tried as terrorists by the Obama administration.

Local, county, state, and federal law enforcement agencies have informed Congress that their ability to properly protect the Homeland from the threats of radical Islamic terrorists has been seriously compromised.  The hundreds of thousands of UN Muslim refugees being resettled in the US by the Obama administration who cannot be vetted to determine if they have terrorist ties; the 250 returning former refugees who were previously Fast-Tracked by Obama to becomes American citizens, then joined ISIS terrorists to kill Christians in Iraq; and the 9500 Middle East Visa Overstays referred to above that the State Department stated have terrorist ties are all serious threats to the Republic.  Over the last seven years, the national security of the Republic has been seriously compromised by the continued flagrant violations of US immigration laws by the Obama administration.

Cong. Ron DeSantis Questions DHS On Its Failure to Pursue And Evict Nearly 500,000 Visa Overstays in 2015 added on Tuesday, February 2, 2016