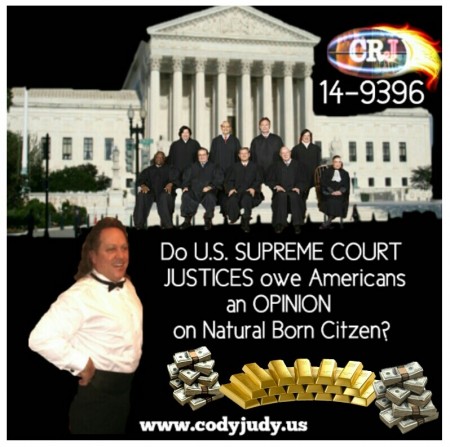 (Jan. 27, 2016) — The [natural born Citizen] qualification for the Office of the President is not the same as the [Citizen] requirement for U.S. Senators or Representatives. The Qualifications encoded in the U.S. Constitution directly give them a Special Priority in the accountability of the U.S. Supreme Court Justices duty in a Life Tenure. The differing opinions in Constitutional Scholarly Opinions even differ, as does the opinion of every American Citizen judge giving their opinions on Facebook as fact of Law. The differing opinions are not new, however what is relatively new is the application of the qualification in the modern Political Arena affecting Americans now in three major Presidential Elections of 2008, 2012, and now 2016 with Cruz, Rubio, Jindal, McCain, Obama. and the problem is particularly affecting millions of Americans right now in many different ways as well as Candidates, so the question is: Do the U.S. Supreme Court Justices owe America an Opinion on the definition of [natural born Citizen] particularly in the Race for the U.S. Presidency?

There is only one Presidential Candidate in America that has a Bi-Partisan Federal Court Record in the defense of the [natural born Citizen] qualification for the Office of the President who has been a Candidate in every one of the last three Presidential Elections and that is Cody Robert Judy. Bi-Partisan means he has sued both major parties- The Republicans in McCain and The Democrats in Obama. He also has two Cases appealing for an Opinion in the high U.S. Supreme Court ie Case No. 12-5276 and 14-9396.

Cody says, ” I do believe the U.S. Justices owe Americans an Opinion. Any Constitutional Scholar will tell you the difficulty that exist in getting a Case like mine, with two Presidential Candidates in the same party, running for the same office, which fulfills the difficult the standing requirement to the U.S. Supreme Court and preferably without an Election hanging in the Balance, but that is exactly what I’ve done in Judy v. Obama 14-9396.”

“Obama has been in office 7 years now. He has every benefit of really being de facto President. He’s enjoyed the White House, decision making, the good, bad, and the ugly of the Office. I on the other hand have not and have suffered the damages Obama’s being in that Office illegally has caused. No one really wants to look at the damages of the illegal usurpation upon someone like myself, but they are significant and accountable damages and I have brought those to the attention of the Court in a lawful manner I don’t think anyone could say the way I’ve brought those to the Court was not in an honorary, civil, and gentleman’s way.”

“The problem is that the problem is not going away. If you have read my lawsuit which is only about 15 pages in single lines, you understand that the questions are asked that indeed are affecting U.S. Senator Cruz, U.S. Senator Marco Rubio, Governor Bobby Jindal, U.S. Sen. John McCain, and U.S. Senator Barack Obama and cover 3 Presidential Elections. It is not easy in the ripening doctrine of Case litigation to be around for a decision from the U.S. Supreme Court. In average cases 7 years is not a far stretch of the imagination to get a case to the U.S. Supreme Court as was recently exampled from Proposition 8 to national gay marriage.”

Indeed the problems caused by the broad based scope of interpretation by politicians seizing upon their own popularity rather than the narrow directive articulated quite plainly in Art. II, Section I, Clause 5 is not localized to just Presidential Candidates but has affected every Citizen’s Contribution to or for any Presidential Candidate.

The Constitution plainly states two types of qualifications for the Office of the President. One type was for those who were distinguished revolutionary patriot [Citizen]s such as were at the time of the Adoption of the Constitution. The other, an incentive to propagate the new American Nations, and also to avoid foreign influence, or the [natural born Citizen] articulated selectively as [born in the U.S. to Citizen Parents] as these are the [natural born Citizens] as was held in the precedent findings of Minor v. Happersett. These are noticed in a quick 2 minute video by the CRJ Campaign entitled a Constitutional Reckoning here: