PULLING THE STRINGS OF ANARCHY 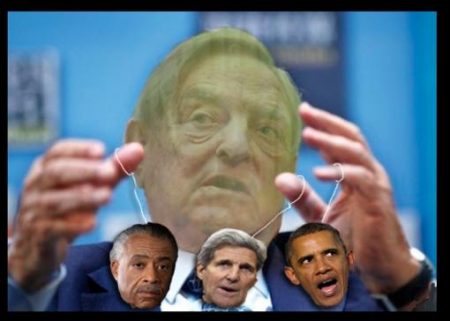 (Aug. 14, 2015) — Do you wonder why so many “peaceful” protests end up in violence?  One year after police officer Darren Wilson shot and killed a black teen in Furguson, MO, violence, in the form of shots aimed at police, again erupted during a memorial protest. Last year the Justice Department, no friend of police, confirmed Michael Brown resisted arrest and attacked Officer Wilson. However, truth be damned, the “hands up, don’t shoot” myth has been kept alive. Why? Because the one wielding power behind the scenes, wants to keep the fires burning. His agenda is anarchy.

This is what allows the Irreverent Al Sharpton to arrive on the scene, spout his own brand of racism, and turn a peaceful protest into a tinderbox that often erupts into violence. (See TPATH article The Purveyor of The Seven Detestable Sins.) However, the irreverent Sharpton is merely dangling on the strings of the puppet master.

I have come to believe that the violence caused whenever a black person is killed by police, justified or not, can be traced to money and influence generated by this anarchist. And no, I’m not talking about President Obama. While I truly believe he is purposefully tearing our nation apart; by race, gender, social status, economic status, etc. he too is but one of the puppets.

So who is the one pulling the strings? Who is the Puppet Master, the Great Anarchist?

IMHO that would be George Soros, using his billions to achieve his agenda.

If you don’t know Soros, do your homework and research this man. He is all of the James Bond protagonists rolled into one real life Dr. Evil.  In the Canada Free Press he’s been called by journalist Jim ONeill, “a multi-billionaire atheist, with skewed moral values, and a sociopath’s lack of conscience.  He considers himself to be a world class philosopher, despises capitalism, and just loves social engineering.”

And those are his good points!

Here’s a partial list of why many consider him to one of the most dangerous men in the world:

His money has been used to bring outsiders into areas of tension; using his puppets to create situations that explode into violence. Doesn’t matter who gets hurt as long as anarchy reigns.

He helped create the image that became Barack Obama. His support, with both money and influence, brought this community organizer all the way from obscurity to the White House.

He created the Open Society Institute which, since 1993, has given more than $7 billion dollars to leftist organizations such as ACORN, People for the American Way, Apollo Alliance, The Tides Foundation, MoveOn.org and Center For American Progress. You’ll find these groups are inbred with the same people, and their missions are the same,  which is to fundamentally change the United States of America. Soros is also a big supporter of Planned Parenthood – another reason to defund this baby parts for sale organization. Through his “philanthropy” he has created minions of puppets.

He wants to destroy American sovereignty. He is quoted as saying, “…the sovereignty of states must be subordinated to international law and international institutions.” He seeks global control over America. Damn the Constitution, he wants us the UN Charter to be our legal document.

Soros supports environmental extremism. His money is behind the likes of Van Jones, self-proclaimed Communist, as well as radical groups that seek to use the environment to destroy America’s economy. Jones, and others who care more about weakening America than saving the planet, are more of Soros’ puppets.

Soros has destroyed national economies. Not small economies. He is credited as the man who broke the Bank of England, dumping 10 billion dollars of pound sterling to create havoc in the British economy while raking in over a billion dollars in profit. During the 1997 Asian financial crisis his currency manipulations nearly destroyed the Malaysian Ringgit. Those manipulations caused the Thai government to label him an economic war criminal.

Now he seeks to destroy our economy.

He wants an end to the dollar as the world reserve currency, a further way to weaken America. Interestingly, Secretary of State John Kerry said on July 11th, if we don’t get the administration’s nuke deal with Iran, the dollar would “cease to be the reserve currency of the world.” Kerry is another of Soros’ puppets.

If you don’t know George Soros, that’s the way he wants it. It’s much easier to pull the strings of anarchy around the world when you are invisible, lurking in the background. As the Wizard of Oz said, “pay no attention to the man behind the curtain.”

I challenge you to pull open the curtain.