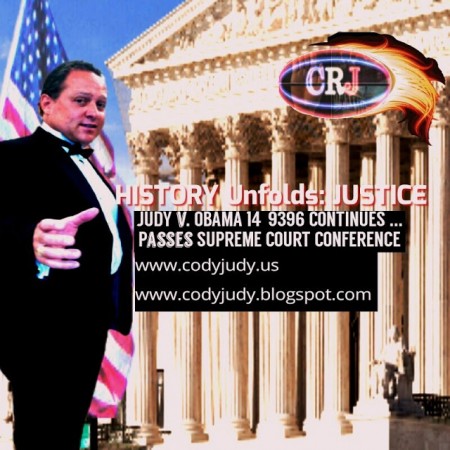 (Jun. 22, 2015) — Today’s U.S. SUPREME COURT ‘ORDERS’ list might be the UNIVERSE SHATTERING EVIDENCE heard around the world! Today a case under consideration by the United States Supreme Court ‘failed’ the death grip of what is called the ‘Dead-List’ of the United States Supreme Court. It’s never happened before with a case that dealt with the Eligibility Questions presented by Mr. Judy, a Candidate for President in ’08 and ’12 and now 2016 asserting Campaign Damages for the unanswered Obama ineligibility question when it comes to the United States Constitution’s demand for a ‘natural born Citizen’.

Speculation and interest has been rising in the Judy v. Obama 14-9396 case across the nation with a range of predictions. Top Anti-Birthers have chimed in with scathing comments and even a ‘prophetic post’ roundly and confidently written by Dr. Conspiracy leader and chief of Obamaconspiracy.org that he comped was set to self-publish at midnight before the ORDERS list appeared at the SCOTUS website, entitled FUTURE NEWS: Supreme Court Rejects Judy plea. One could almost see the beads of sweat appear as the confusion when Judy’s case was not seen on the “Dismissed” side of the Orders List and instead landed on the “PENDING ORDERS” list.

Of course a glorious round of applause went up on the Judy side and near disbelief also, having suffered so many defeats over the last six years in 15 Actions held in the lower Judicial Courts as well a U.S. Supreme Court (12-5276) case that originated from a State Supreme Court case decision in Georgia rather than a Federal Rights and Congressional Act Violation the present action represents in origin. Could that be the difference?

Presidential Candidate Cody Robert Judy (CRJ) said “Yes,” that could be the difference.” He postulated, “In many ways the United States Supreme Court allows for what is called a ‘ripening’ of Cases before deciding to weigh in on them. That entails a real exhaustion of State Remedies that quite readily exhaust petitioners, sometimes completely out of continuing on.”

Since the beginning of Obama’s term in Office almost all the cases have been ‘dismissed’ based on a lack of standing about which Obama’s attorneys are on record as stating, “The Petitioner(s) were not a Presidential Candidate” and that has roundly been the way that Obama has not been called into Court to defend the allegations of his not being a ‘natural born Citizen’ qualified by the Constitution’s demands. The demand of ‘natural born Citizen’ for President and Vice President, similar to the higher age demanded also, is unique from those lower offices of U.S. Representative and U.S. Senator defined by the Constitution as ‘Citizen’.

Judy said, “C’itizen’ was used for the Office of the President, but it was specifically defined as limited only to those who were such at the time of the Adoption of the Constitution,” lending credence to the unique difference between the ‘natural born Citizen’ and the ‘Citizen’ qualification variation between the Offices. So what is the difference?

The Presidential Candidate said, “The difference is the ‘natural born Citizen’ definition is not listed under the naturalization terms cited in Title 8, Aliens and Nationals, which includes all kinds and types of varied accomplishments towards defining American Citizenship, but the one that is not defined is the only one the U.S. Supreme Court has also defined in the Minor v. Happersett, 88 U.S. 162 (1875) case cited in his case as precedent [it was never doubted those who were born in the Country to Citizen Parents are natural born Citizens], meaning Born in the U.S. to Citizen Parents. I’ve never thought the Office of the President was an office we should fool around with and have doubts about who was in it.”

Cody Robert Judy’s campaigns for President in the fight to defend the Constitution didn’t begin with Obama’s ineligibility question; they actually began with a Federal Court Case against Sen. John McCain and his ineligibility that was filed just days before the Republicans nominated him as their nominee in 2008. In Judy v. McCain, many have supposed McCain’s military duty exempted him from the qualification of ‘natural born Citizen’ [Born in the U.S. to Citizen Parents], but Judy said, that’s as foolish as thinking those who have become new immigrant Citizens in this Country could not be summoned up for a draft in the military. They could be called upon to fight for this new country of theirs, but still not be qualified to be President. The military is sworn to defend the Constitution, not overthrow it. Those military men and women have a duty towards the Constitution first, not second and those who do not meet the ‘age’ requirements of the Offices defined in the Constitution also still have to fight for the Constitution in which they are not allowed to hold office because of being too young, but still old enough to fight.”

Judy v. Obama 14-9396 was placed on the “pending orders” list because Judy did not meet the standard for ‘informa pauperis’. However, there was some confusion about it at first. If you look at the PDF filing of the Court Orders you’ll see just below Judy’s case, in a specific order(s) spelling out just that description in Cases 14-8082 and 14-9797 which state clearly, “The Motions to proceed informa pauperis are denied.”

In Case 14-8082 just above Judy v. Obama is states for that case: “The Motions of Petitioners for reconsideration of orders denying leave to proceed informa pauperis are denied.”

Judy v. Obama 14-9396 is then listed with no ‘specifications’ of pending orders.

Next comes the Case 14-9797 ‘The leave to proceed informa pauperis by the petitioners is denied.’

There are four other cases also listed with no specific ‘ORDER’ detailed next to their cases, leaving us really not knowing what the orders are about for sure, or what they might include, although all four have had informa pauperis rulings on them and they are listed on their docket reports already.

Mr. Judy said regarding his Case, “Well, I did file a Motion for leave to file my petition ‘informa pauperis’ in Judy v. Obama 12-5276, 2012 and my case or Writ of Certiorari Petition was just “Denied,” and later I filed for a Review and that was Denied also, verifying that Informa Pauperis standing was granted but the Case was Denied Cert. Nowhere on that Docket do you see a ‘disposition of the multiple Motions’ I filed in that Case, either. This tells us the Court doesn’t necessarily feel the need to formally rule on Motions before the Court, or they do so and do not print it on the Docket, as the Case in 2012 is Evidence of.