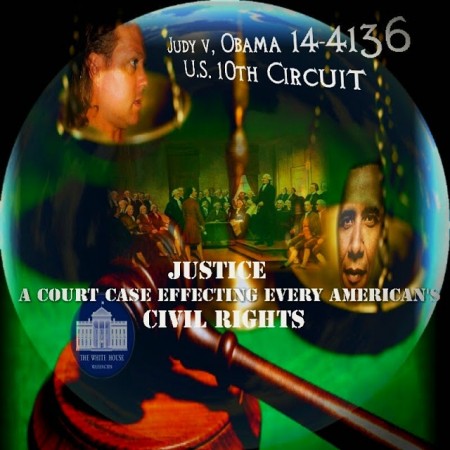 (Dec. 30, 2014) — As Americans are settling themselves after the Christmas Season of gift giving, one of the most important gifts may yet be unwrapped and under the tree addressed in waiting to: “The American People” in the form of a U.S. Court of Appeals Case that today was confirmed to be “in conference” and “submitted to the Panel of Judges in chambers for written opinion” at the United States 10th Circuit Court of Appeals in Denver, Colorado.

Constitutional scholars would call the gift staggering to even contemplate. What indeed are the stakes that could affect every single person in the United States of America as well as future generations for the next ten generations that are found in Cody Robert Judy v. Barack Hussein Obama/Barry Soetoro et. al., Case No. 14-3146?

Shock and Awe was used as the name of a military operation carried out upon Iraq by former President George W. Bush, but the military description was developed or written by Harlan K. Ullman and James P. Wade in 1996 and is a product of the National Defense University of the United States.

The doctrine imposes an “overwhelming level of Shock and Awe against an adversary on an immediate or sufficiently timely basis to paralyze its will to carry on … [to] seize control of the environment and paralyze or so overload an adversary’s perceptions and understanding of events that the enemy would be incapable of resistance at the tactical and strategic levels.” When applied in the political arena conditions must be perfectly timed and executed and the results are devastating to an opponent who is left scrambling to recover necessarily thrown into the back seat of defense with near total bewilderment. If I receive a favorable decision this could be the universe shattering decision we have been patiently waiting for.

As it concerns Obama the Constitution of the United States and its demands for a natural born Citizen (born in the U.S. to Citizen Parents) acts as a mirror does in identifying a vampire who has no identity or reflection and thus represents a horror nearly unimaginable in description similar to that faced by an emperor who has no clothes on and is nakedly exposed in a true light strutting down Main in a parade.

You see, Obama has persuaded nearly everyone that he is qualified as a ‘Citizen’ to be President, but the term or qualification of “Citizen” hasn’t been used as a qualification for the Office of the President since the Founders declared it for themselves at the time of the adoption of the Constitution. Understanding that the Union had not existed long enough to require a ‘natural born Citizen’ to be President, and that many key in the service of the Union would be prohibited from the Office of the President, the founders and framers developed as a natural national security barrier and measure of qualification the Article of the Constitution known as Article two, section one, clause five.

In this second article of the supreme law of the land, it reads, “No person except a natural born Citizen, or a Citizen of the United States at the time of the Adoption of this Constitution, shall be eligible to the Office of the President.” This simple phrase declares anyone who has any kind of foreign alien-ship not permitted or prohibited from legally holding the powers declared to the President of the United States.

One Response to "Breaking News: Judy v. Obama in Conference – What’s in the Balance?"