“THE DAMAGES MAY BE IRREPARABLE” 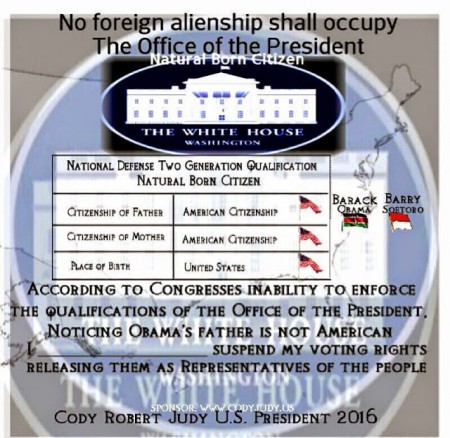 Don’t want to contact your U.S. Representatives or U.S. Senators about the U.S. Constitution being violated in the qualifications of the Office of the President by Barack Obama’s self and voluntarily released long-form birth certificate to the White House Press Corps and the American public, certifying himself as ineligible for the office?  Then go ahead and sign this voluntarily, releasing your right to vote.

If the Constitution is to have claim on your rights, it must be defended, preserved, and protected. Obama’s first order of business upon his fraudulent election, and I say “fraudulent election” because a majority of Americans did not know in 2008 that a long-form fabricated birth certificate even existed, because it hadn’t been fabricated yet, and many did not understand that Obama/Soetoro was ineligible because of his father’s alien-ship to Kenya and Indonesia.

Now, it’s certainly no disrespect to take a stand for honoring Obama’s fathers; and it is rather Obama’s dishonor that prohibits him from admitting he is not qualified on a Constitutional basis that no foreign citizenship inherited from either parent or birthplace shall legally occupy the Office of the President in the United States of America, although foreign citizenship of the parents does not preclude anyone from the U.S. Representatives’ or U.S. Senators’ Offices as long as the “Citizen” requirement is established and providing the age qualification and residency requirements are also met.

When the U.S. Constitution is suspended in your life, including your voting rights, rights to property, rights to trial, evidence, and all the free speech and free press hullabaloo that you don’t really care about, as well the qualifications for the office of the President because you never objected to it to your elected leaders, what you are left with is a certain state-controlled bubble which you and your family will live in.

Now, Hollywood has recently been served a little portion of that rodent delicacy as claims have been swirling that North Korea was behind the biggest domestic-soil hack attack on Sony Corporation. You’ll see here just a little of what happens to Hollywood’s free speech and free press, which it has grown to disdain, with its support for communism and anti-American principles embedded in our U.S. Constitution. That’s the thing about the Constitution:  when one part is suspended, the whole thing collapses because of what is referred to as Construction prohibitions, meaning you can’t add or take away bits and pieces as you’d like. One principle goes with all the rest, so in legal theory your voting rights are tied directly to the qualifications of the Office of the President.

As the Office is violated, so are your voting rights and your free speech and privacy rights. One of the superior ways that the State uses to suspend your free speech and free press is exactly what the hackers have done to Sony. Do you think Angelina Jolie really enjoyed having laid bare Mr. Rudin’s reference that Ms. Jolie is “a minimally talented spoiled brat”? Humiliation is a tool of blackmail that serves the Communist State well, for it keeps people in line. Do you suppose now that Angelina or Mr. Rudin will feel a celebrated form of free speech is ever theirs again, or will they now guard and mistrust every possible corner in their lives as a spy ready to sack them?

Do you think the Hollywood Industry itself will feel comfortable in free speech and free press when the alleged hackers are “thought” to be disgruntled about the film “The Interview” that is about the North Korean leader Kim Jong-un? The extent of the damages of this one hack job might curtail Hollywood from ever producing another film with a foreign government as the enemy of the United States because of potential reprisals, and this, in its truest form, is the collateral collected by communism, something so many Hollywood elites are coddling right now as if it was a cute little kitty.

Many Sony employees have watched in horror as their identifications have been stolen and then leaked, and one must ask, what is in an “identity” that really matters anyway? Did they care about Barack Hussein Obama’s identity also being Barry Soetoro’s; one with Kenyan citizenship and the other with Indonesian citizenship when they were voting in 2008 and 2012? “Oh, pesky identities,” says Congress; “We are all one identity anyway, and yours are more theirs then theirs yours,” so let’s all be friends and kum-ba-yah?

Leonardo DiCaprio, who beat out Al Gore in being selected by the United Nations as a Messenger of Peace with special focus on Climate Change” – “Horrible behavior,” producer Mark Gordon wrote. “Actually despicable,” Pascal corrected him” – has got to be feeling those released remarks might be a cut in pay next time he’s up for a role.

It’s certainly not that we don’t all want clean air to breathe and clean water to drink; it’s that we don’t want it laced with Governmental Acid that’s set to control the population and charge you for air in the order that you can live if you’re a slave and see a doctor if your contributions have met with the right party. The hackers have proven one thing: perhaps it isn’t “who” you know, but “what” you know, and obviously Hollywood doesn’t know who Barack Obama is when it comes to their protection.

All that money to Barack Obama’s campaign and he couldn’t protect them; of course, when it comes to national security, he breached that when he became a walking, talking violation of the Constitution and the lies that accompany him upon his opening his mouth in that office. It’s not that it doesn’t sound good when you hear the devil quoting scriptures; it’s that he’s doing it to “make you like him.”

Nothing is sacred; as the Constitution goes with our lawmakers, so does the James Bond Script that has been hacked. One would suppose that the legal representatives from seven of the biggest movie studios in the United States would be huddled up in Sherman Oaks, California to talk about how to uphold the U.S. Constitution as their best defense of anti-piracy instead of DMCA-dispensing gospel. The global strategy is not working out too well for Sony, Time Warner, Viacom, Paramount, Disney, NBC Universal, and Fox when they can’t even keep a meeting secret because security in the form of protection of individual rights in the United States has sunken to an all-time low.

So my suggestion to all these wonderful, beautiful people in Hollywood is to just fill out the “suspension of voting rights” form cited above, do us all a favor and quit contributing to any campaigns to those now in elected office, as they themselves have not lifted one elected voice in the Halls of Congress that disposes with the truth that there is a foreigner in the White House. What’s it going to take for those in Hollywood in a supporting role of these fraudulent practices in Congress and the Office of the President to consider that communism just doesn’t have their best interest in mind as it relates to their professional careers?

It’s certainly not that I don’t love these folks, because I do. They are beautiful people who I see in many caring and loving ways doing their best to help. I just question the manner of confusion they have gotten themselves into, and I really am worried about the way in which they will be taught to change course, for the damages may be irreparable. If they are waiting around for Godzilla, it might just be too late to save them.