“WE NEED MORE WALKERS THAN TALKERS”

(May 17, 2014) — On Saturday night, The Post & Email spoke with three attendees of Operation American Spring (OAS), all of whom provided unique perspectives on the event thus far.

Mike Volin, founder of WheresObamasBirthCertificate.com (WOBC), said that he will be holding a strategy session this evening with a team of volunteers, with more news to be released at a later time.

Volin will be broadcasting live beginning at 10:00 a.m. on Sunday morning for a prayer meeting, with The Post & Email and researcher Martha Trowbridge co-hosting.

We asked Volin what the high point of Saturday was, to which he responded, “the march on the White House.”  He added, “Everybody was totally silent.  There was no mumbling or grumbling; there was no shouting or screaming.  There was no “Rah, rah rah!”  We followed directions.  We marched from the [National] Mall quietly, peacefully, to a drum roll.  When we got to the White House, we were told to stop and form a line.  From the pictures, you can get an idea of how many people were at the White House; a whole block.  I ran out and grabbed some pictures, and then Ruth had her flag upside-down.  One of the coordinators noticed it, and said, ‘Wow, that’s a great idea,’ and then everybody was told to turn their flags upside-down.  That’s a sign of distress.  We just stood still; nobody spoke from Operation American Spring.  We just stood there, turned around, and we walked all the way back to the Mall.  We did a loop around the U-turn, and when we were out of sight of the White House, we turned the flags up correctly.  But when we were in front of the White House, our backs were turned to the White House, and the flags were turned upside-down.”

Jeff Harrison, a WOBC volunteer and founder of “Operation Pony Express,” next spoke with The Post & Email and said that an OAS spokesman coined the slogan, “We are here; why aren’t you?”

Harrison said that while serving in the Marine Corps, he was expected to “lead by example.”  “Why aren’t other high-ranking officers here?” he asked. 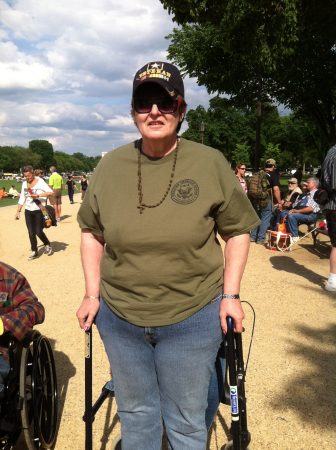 “We have people who walk, and we have people who talk, and we need more walkers than talkers,” Harrison continued.  “We need people to continue to do what they’ve been doing, just as Lt. Zullo asked people to write letters to their congressmen,” he said, referring to Cold Case Posse lead investigator Mike Zullo, who announced more than two years ago that Obama’s long-form birth certificate and Selective Service registration form are “computer-generated forgeries.”

“I think Mike sent you a photograph of a veteran in a wheelchair who is 100% disabled.  He was in Vietnam and subjected to Agent Orange.  It took him ten years to get his benefits.  There was one lady who came from out West who took a two-day bus ride and is paralyzed from the waist down.  There was a veteran with a walker with wheels on it.  There was a lady who was in the Army during Vietnam and was a technician who when they operate, they give the tools to the doctor.  We had all kinds of people from different nationalities here.  The one main thing is that we have a lot of talkers.  People need to get off the bench and get in the game.”

Cheryl Surber, who has two Bachelor’s degrees in media a Master’s degree in marketing, spoke with us with an idea to urge the major media to cover OAS.  “Regarding ‘I was here; where were you?’ we need to expand on that.  We need to get a lot of people who are out there to contact the news media’s Facebook pages and put a comment, ‘I was here, where were you?'” she said. “If they had 2,000 or 3,000 individuals putting that comment there, I think they’d get the message that they need to get themselves in gear and report this.”

“It sickens me that they are licensed…they should all lose their license,” Surber said.  “We should all call up and complaint to the FCC if they don’t do it.  We could have 1,000 or 2,000 people bombarding each of them:  CNN, NBC, CBS, Fox, MSNBC.  Glenn Beck has been telling people not to come.  I am so angry with that guy.”

Volin and Harrison then shared a special event they have planned for Sunday following the prayer service.

6 Responses to "OAS: Impressions and Plans"