“LIFE, LIBERTY, AND THE PURSUIT OF HAPPINESS” 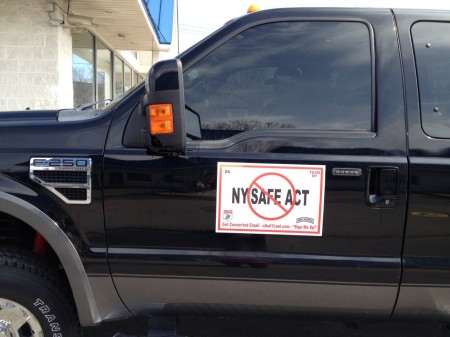 (Apr. 18, 2014) — Sheriff Mike Carpinelli will be stoking the fire with words about FULL Repeal of the Safe Act in Gouverneur this Saturday. Question; Do ya think he will have some words of praise for Sheriff Mack? Mike took Sheriff Mack’s Constitutional Peace Officers course and DOES uphold the law – the Constitution! Thank You, Sheriff Carpinelli – for your fine work – Thank YOU for standing shoulder to shoulder with US at Indian Lake. I am proud and honored to stand with you in Gouverneur……..Let the Cannon Fire for FREEDOM and LIBERTY !!! In commemoration of 1775 at high NOON – Saturday, April 19 – Gouverneur, NY.

Sheriff Mack helped make history. He selflessly went to Nevada and helped back down the federal government. This is a shining moment for America. It matters not if you agree or disagree with the plight of cattle ranchers or that issue. It demonstrates the power of a UNIFIED people. It shows that there is more to civics than voting. It displays the fact that WE can fight City Hall. This incident gives America hope.

At the end of the battle Sheriff Mack made a speech that every American should see.

Sheriff Mack has stood in the fields of NYS to fight for FULL Repeal of the Safe Act. He was not paid huge fees. He entered the halls of Albany and went to the legislature chambers to deliver OUR Demand Petition Post Cards and did it with no fanfare. He continues to connect with US and prays for OUR success. Unlike most “advisors” in OUR efforts, Sheriff Mack has NO political ambitions and seeks NO power. He is head-and-shoulders above most luminaries fighting in OUR cause. He selflessly stands shoulder-to-shoulder with OUR goal for FULL Repeal of the Safe Act. The Sheriff is “The Real Deal.” CSPOA is the pinnacle organization fighting for Freedom and Liberty. Sheriff Mack’s teachings should be held in the highest regard.

If only everyone knew what you do, you would be endowed with the highest honors and medals. Your unwavering loyalty to America is no less than that of Franklin and Jefferson. Your understanding of true Americanism is astounding. Your selfless efforts and courage are humbling. You talk the talk as many do, BUT unlike most – you walk the walk – outstanding, SIR !!!!! ……humbly I say Thank YOU.

Thank you for founding http://cspoa.org/ and thank you more for your dedication to its principles. Thank you for continuing to travel the country. Your efforts are much more than commendable.

ALL Americans should donate to the CSPOA cause. If they would just understand their donations to politicians are a waste and a donation to your work pays dividends, America would begin a new chapter of LIFE, LIBERTY and the PURSUIT OF HAPPINESS.

A “Sea of Visual Protest” Shall be seen across NYS.