ARE YOU TAKING BACK YOUR TOWN?

One picture sums up how far you have gotten. That one picture is below.

This is a county in the Northwest, whose name we can’t say yet, last night. Yes, that is nearly 100 people, from all political backgrounds, in attendance for a public hearing to take down the NDAA. 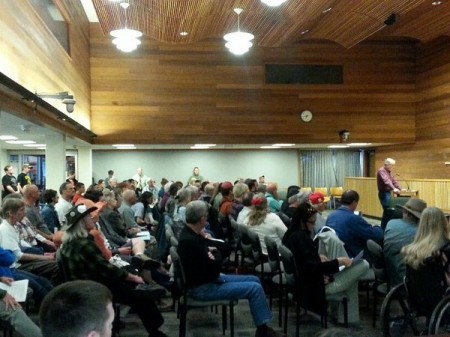 Now, we want to take that resistance even further. Watch the new 60-second trailer for the Take Back Tour here or by clicking on the image below:

On the anniversary of the American Revolution, we are holding a one-day moneybomb to give us the funding necessary for the Take Back Concert Tour. The Media has thus far refused to cover the NDAA, so we are getting the word out a different way: through music. This is for your children. This is for your grandchildren. This is for you. We have the chance to bring this message, what you all have fought for, to nearly 10,000 people in the next three months.Share the Moneybomb with your friends here.Please mark your calendars, for April 19th, when we kick off the Take Back Tour Moneybomb, and donate $5, $10, or $20 on that one day to make this a reality. Please forward this onto anyone else who you know wants to make a difference.Pitch in $5, $10, or $20 on April 19th and help us get the message of freedom, of resistance against the militarized state, out to the public. Thank you.
Facebook Event: https://www.facebook.com/events/274087366090702/281861905313248/?ref=notif&notif_t=like
More News:
Nevada GOP Condemns NDAA Detention Provisions:
The Nevada GOP passed Resolution G109 last weekend, condemning the 2012 NDAA’s detention provisions and any unConstitutional application of the laws of war on Nevada soil, and called for the State legislature to Intervene last weekend. Daphne Lee and the Nevada Resistance have done a great job. Check out the resolution below: http://pandaunite.org/ndaa-nevada-republican-party-passes-anti-ndaa-resolution-calls-on-state-to-intervene/
Judge Dismisses Lawsuit Over Drone Killings of American Citizens: We wish we could say we’re surprised. However, this has become politics as usual for our friends in D.C., and yet another reason to beat the NDAA at the local and state level. Judge Rosemary Collyer decided it would be wrong for her to intervene in “operational combat decisions” even though the U.S. is not at war with Yemen. Since the whole world is a battlefield, however, this sets legal precedent for courts to dismiss a case from an American executed on U.S. soil because it was an “operational combat decision.”http://news.antiwar.com/2014/04/04/judge-dismisses-lawsuit-over-drone-killings-of-us-citizens/
Are you taking back your town?

Recently, we made the Take Back Packet, our exclusive packet of information to resist the NDAA, easy to access without signing up. We also added a new form for you to ask us for help getting started. If you’ve thought about taking back your town, but haven’t yet, maybe now’s the time to start. The question you have to ask yourself is: How much do I care about my liberty?If, when you answer this question, the answer is “Enough,” you can now get the Take Back Packet by going right to this link. If you need help, you can also contact us there and we’ll be happy to help you get started.Last night, almost 100 people stood for their liberty. If they could, why can’t you? How much do you value your freedom?
Don’t forget to spread the word about the Moneybomb April 19th.

Invite others to get breaking news from the NDAA Resistance: https://tinyletter.com/pandaunite