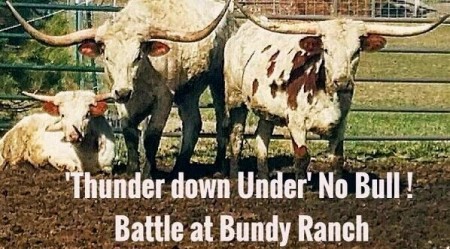 (Apr. 14, 2014) — Proving Alex Jones has missed the The-Thunder-down-Under story or ‘vehicle’ that perpetuated and fueled the successful climatic resolution at the Bundy Ranch Battle perpetuated from behind the scenes.

The claims of Infowars revelation that D. Sen. Harry Reid’s involvement with the Chinese in Solar Power Plant in the Nevada Desert as the source of the Bundy Ranch Battle retreat of the BLM Federal Compound site, set up as a parameter around the Bundy family ranch, actually has, in effect, hurt the underlying and paramount jet fuel punch knocking the Federal Government to the floor in a stunned daze.

I’m going to try to explain this as briefly as I can although it is very in- depth and I’m not known for brevity on my blog, which I mention only in the satisfaction for you to know that I do try.

Alex Jones’ Infowars has had a lot of great stories and continues to be on the cutting edge of revealing real-time impacts on and for our Nation gone astray from the Constitution’s Principles that our Nation was founded and has blossomed upon. As a conduit is instrumental in breaking through to the mainstream, Infowars is and has shown itself very valuable to the public in the Republic’s interest. They feature an article today featuring Reid’s none too rosy feeling with what’s happening written by Jerome Corsi, author of Where’s the Birth Certificate?

The answers to my assertion lie in BLM policy itself as we delve into that under Solar Regional Mitigation Planning Policy which offers a unique approach to mitigating the unavoidable adverse impacts associated with developing and operating utility-scale solar power generation facilities on public lands with solar energy zones or SEZs.

I found these actually quite amenable, but certainly don’t see them adhered to in the Bundy Ranch action. In seeing these, it is hard to understand the angle with what happened at the Bundy Ranch and the way it was handled such that the Green or environmental crowd and the Chinese are furious at having their causes scapegoated because ‘positive outcomes’ are supposed to be ‘magnified’ in mitigation actions, the least of which involved the Bundy Ranch action. It’s pretty safe to say the operation was botched to begin with and has turned a desire for clean energy, clean water that we all appreciate into the black lung.  Of course, ENN, the Chinese Energy Giant, can’t be really happy with this, as it’s very bad P.R. going viral.

The first thing I found was that in the Solar Regional Mitigation Planning FAQ’s #2: “off site mitigation is covered under current BLM policy and consists of compensating for resource impacts by replacing or providing substitutes or habitat at a different location than the project area. Off site mitigation is supplemental to on site mitigation and is used to enhance the BLM’S ability to fulfill its mission of providing multiple uses on public lands while ensuring its resources management objectives are met.”

Why would Bundy’s herd not be purchased, bought, compensated, or moved, or “a solar facility fenced” to keep the cattle out as a remedy sought by the BLM policy in the first place, which makes a whole lot more sense in the short narrow landing strip of meeting of the minds? I don’t think a massive power plant would cover even 10 square miles in total and if it did, the turtles would indeed be just as big of a problem as the cows.

When you think of 200 armed federal agents, snipers, high-tech surveillance capability and a military compound set up almost instantly surrounding a ranch, you really don’t think of the BLM any more as assisting ranchers to help maintain any ranch. This leads us to wonder if indeed it was used as a gauge to just see what would happen.

Discontented comments on the Solar PEIS revealed the necessary reasons for modifying the way the agency did business in the first place; in fact, where unavoidable impacts are found to be significant, the BLM requires off-site mitigation.

Now, very crucially, BLM’s authority is cited as resting in the Federal Land Policy and Management Act (FLPMA), regulated by the Secretary of the Interior FLPMA SS 302(b),43 U.S.C. ss 1732(b). What does the organization structure look like?

The Department is administered by the United States Secretary of the Interior, who is a member of the Cabinet of the President. The current Secretary is Sally Jewell. The Department has often been humorously called “The Department of Everything Else” because of its broad range of responsibilities, the likes of which we have seen don’t include experience in herding cattle without causing them to have heart attacks, freaking them out with helicopters, causing calf and mother to separate in chaos and absolutely ruining financial gain possibilities to get paid, reimbursed, or compensated in any intelligent manner without totally ruining it for all parties involved. 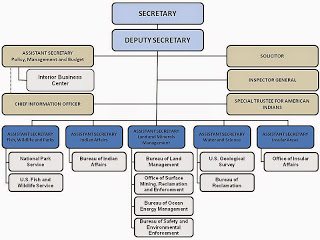 What does Obama’s illegal and unqualified cabinet look like? Here they are, the whole unqualified ineligible herd in the executive branch masquerading as legitimate: 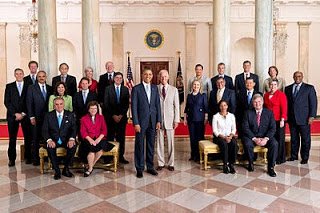 The value that Infowars missed on one hand, or perhaps even calculated on the other, because I do believe Alex Jones to be very intelligent, would not go ‘mainstream’ and thus collaborated in an effort to sell the car to the highest bidder or most hits, was the fact revealed here on my blog that went viral and easily doubled any other post I’ve ever written.

“Oh, it’s just a little blog, Cody, nothing big has ever happened here of supreme interest?”

Let us consider in a historical moment of reflection “this blog” in the biggest and most important story of our time, because of the biggest COVER-UP and SCANDAL upon the Republic’s history, for which we stand; remembering one nation, indivisible, with liberty and justice for all.

One Response to "“The THUNDER Down UNDER” in the Battle at Bundy Ranch – No Bull!‏"