OBAMA’S PRESIDENCY BASED ON A “FABRICATION” 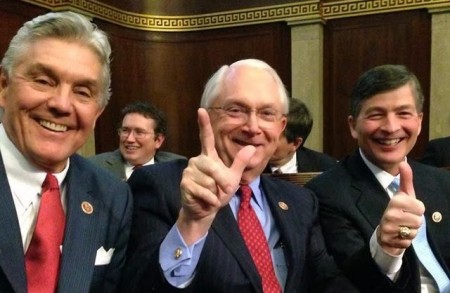 As the Chairmen of either the Subcommittee on Oversight and Investigations/or/ Housing & Insurance I would think “Insurance” under the House Finance Services Committee certainly has jurisdiction in regards to funding A.C.A., and or Obamacare as an insurance.

I was a write-in Candidate for Pres in 2008 and sued Sen. McCain & Sen. Obama in 2008, I continued my standing in 2012 against Obama running for Pres in the Democratic Party and took that clear to the United States Supreme Court in Judy v. Obama 12-5276, and 2013. The standing I have to challenge Obama’s authenticity full fills all 3 demands of standing, and the Judicial Branch has basically deferred this action to one for Congress. I have maintained my standing declaring for 2016 as an Independent for Pres. (The text of the law suit is here 2012 and here 2013 )

The burden is indeed great for one judge or a panel of judges and I believe should be heard by Congress, but no one has come forward with standing who could withstand the charges of ‘racism’ spewed by the Mainstream Media, as Donald Trump served to show. That is where my 2008 suit against McCain I filed first comes into value. I stood up for the principle as McCain was not born in the U.S. and need two acts of Congress upon his identity. Each was a process of naturalization clearly a man-made law. The natural born citizen clause never was in doubt for those born in the U.S. to Citizen parents, when it comes to the most powerful position in the U.S. or the world, do you think ‘doubts’ ought to be recommended? Of course not.

The cost to me has been life-altering over the last 5 years and I have estimated to be easily ######### time & dollars. I owe the people who have contributed to my campaign this as well as myself. I don’t like the thought of letting people down, when Obama was not born in the U.S. and his father was not a Citizen, he fails the two-prong test. Also, I did not just use my testimony in Court, but submitted evidence of Joe Arpaio’s Cold Case Posse which proved with over 2500 hours of professional law enforcement investigation the document Obama handed out at the White House Press Corps Room was a fabrication, his social security card is a mismatch, and his draft registration has a fraudulent year stamp dated on it.

If you were in a political race with someone in your 19th District who had that many shenanigans out right wouldn’t you be upset about no one listening and everyone covering it up?

As such Chairmen of the Subcommittee, I would humbly ask you if you would conduct a hearing on the authenticity of the ACA because it was not signed by a legally qualified person in the Office of the White House according to the U.S.C., Art. 2, Sect 1, Clause 5?

With the Authenticity of the A.C.A, proven to the House, reparations made to me by the House that a responsible Court would make and the fact The House is in charge of Finances, the credibility of the charge would be seen in a much greater light by the U.S. Senate when it went or if it went to them before Obama resigned the White House.

The cost of Obamacare is frightening and it certainly is going to cost us all a lot more 1/5 of the entire budget I guess. I implore you to hear my testimony in the subcommittee you chair so I can further brief you on the fact that Obamacare/ACA was not signed by a qualified President. I can call a number of professional/expert witnesses to testify on these facts if you will hear us.

I briefed two of S.C. R Tom Rice’s Aides on this also regarding S.T.O.P. and offered an Amendment, but wasn’t called back.