Screenshot from Sen. John Cornyn's website on February 17, 2014 claiming that Cronyn voted against raising the debt ceiling, which is accurate. However, Cornyn disingenuously does not admit to having changed his vote "reluctantly" to end Sen. Ted Cruz's filibuster 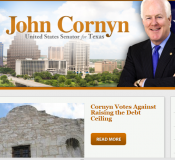