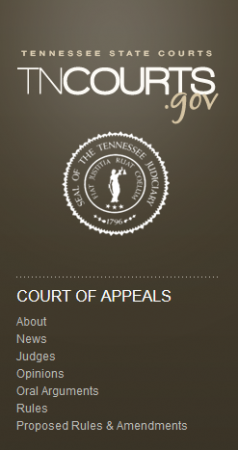 (Nov. 20, 2013) — On Wednesday morning, an appeals hearing was held at the Tennessee Appellate Court building on West Main Street in Knoxville in a case against CDR Walter Francis Fitzpatrick, III (Ret.).

The hearing today stemmed from Fitzpatrick’s conviction in December 2012 for “tampering with government documents” at which Fitzpatrick’s attorney, Van Irion of Knoxville, was not permitted to present his client’s defense by Judge Walter C. Kurtz.

On December 7, 2011, Fitzpatrick removed documents from the Monroe County courthouse after observing the selection of grand jurors and trial jurors earlier that day in which he described Judge Amy Reedy as having openly hand-picked them.  For the last four years, Fitzpatrick has pointed out corruption, cronyism and grand jury-rigging in the Tenth Judicial District of Tennessee, which includes Monroe, Bradley, McMinn and Polk Counties.

Allegations of related illegal activity regarding the grand jury and prosecutor’s office were reported by The Chattanooga Times Free Press in August 2012.  Members of the Tennessee General Assembly are now seeking the removal of District Attorney General R. Steven Bebb, while his deputy, Paul D. Rush, was cited for ethics violations earlier this year.

Fitzpatrick reported that each side was provided 20 minutes to speak.  “Van did not use all of his 20 minutes and stopped and reserved his time for later,” Fitzpatrick said, noting that the state’s attorney handled all three of the cases on the docket that day.

Fitzpatrick said that a judge from Madisonville, which is located in Monroe County, where Fitzpatrick’s trial was held, recused himself from hearing his case.  There was a total of three judges hearing oral argument who Fitzpatrick said “came to the bench very well-prepared.”

“Their inquiries were focused on what was imminent about why I had to act in the way that I did,” Fitzpatrick said.

The judges are reported as:

Fitzpatrick described the judges’ panel as:

Recusing himself from the case: J. Curwood Witt, Jr. (from Madisonville, Tennessee). It was Frierson who replaced Curwood.

Jerry Smith posed the first questions regarding the issue going to what is or is not “imminent.”

D. Kelly Thomas, Jr. is the person asking during the last portion of part two: “Let me get this straight…do you mean to tell me…”

The Appellee/Plaintiff attorney you hear making the case for the state of Tennessee is Attorney Kyle Alexander Hixson.

Fitzpatrick said that Irion told the judges that Fitzpatrick took the documents from the Monroe County courthouse because he “saw a crime being committed,” which Irion called “a necessity defense.”