WHILE “CONSERVATIVES” WONDER WHY OBAMA BEHAVES AS HE DOES

(Oct. 2, 2013) — As a result of an editorial written by Joseph DeMaio on Wednesday, The Post & Email learned that Twitchy had reported on the Obama regime’s reinforcing of the closure of the World War II Memorial breached on Tuesday by a group of aged veterans visiting from Mississippi.

Following the visitors’ breakthrough of barriers and tape on Tuesday, mainstream news outlets had reported that the National Park Service (NPS) had said that it would be turning away all visitors for the remainder of the government shutdown.  The partial shuttering of government departments began on Tuesday at midnight after an appropriations bill failed to pass both chambers of Congress.

The NPS reportedly threatened to arrest anyone attempting to breach the policy set by the Obama regime.

While national parks and monuments were expected to be closed from lack of funding, the World War II Memorial requires no staff or on-duty police officers, as its design allows visitors to walk or roll through on wheelchairs any day of the week.  Many World War II veterans visiting this month are arriving on Honor Flights, which cover the cost of the trip so that elderly veterans may have a chance to see the memorial erected as a result of their heroism.

“Barry” is allegedly the name Obama used while at the exclusive Punahou School during high school and at Occidental College in the 1970s.

The comments under Twitchy’s headline decry the apparent order from the Office of Management and Budget (OMB) to the Park Service to reposition the barricades, which Rep. Steve Stockman and other congressmen roundly criticized.

Additional groups of World War II veterans were expected to have arrived on Wednesday and are scheduled to tour the monument throughout the month.  According to news reports, those veterans may be arrested if they attempt to move past the barricades.  However, The Hill reported on Wednesday that “The National Park Service opened the World War II Memorial Wednesday to visiting veterans after the site became a flashpoint of controversy.”

At approximately 4:17 p.m., The Post & Email created a sign-in and left the following comment which was published:

If pundits, reporters and members of Congress had reported on the questions lurking behind Barack Obama’s fraudulent documentation, he would never have been allowed to usurp the office of the presidency, bankrupt the country and insult its most cherished heroes.  Instead, “birthers” were ridiculed, insulted, defamed, and their lives threatened while the media said nothing.  It is now obvious that this man is not an American regardless of where he was born, and that his intent for America was purely evil.

The Post & Email’s registration with Twitchy through Disqus remains intact to leave future comments as seen below.  Readers can see that a new comment has been moderated following The Post & Email’s, which had appeared directly above the comment from John Ansell.

Comments with foul language or which speculated that Obama is from Kenya or is a Muslim were allowed to stand.

A two-year law enforcement investigation has declared Obama’s short-form and long-form birth certificates forgeries as well as his Selective Service registration form.  His birthplace, parentage and life story have additionally been questioned.  The Maricopa County, AZ Cold Case Posse, which performed the investigation, has called upon Congress to launch its own probe into the forger or forgers of the long-form birth certificate image posted on the White House website.

The image is inaccessible as of this writing because of the government shutdown, which Obama blames on Congress.  Obama erroneously refers to the impasse as one of “budget,” although an actual budget has not been passed in more than four years.  During that time, Congress has been agreeing on “stop-gap” appropriations bills until Monday, when an impasse between the two chambers resulted in a lack of funds for “non-essential” government operations. 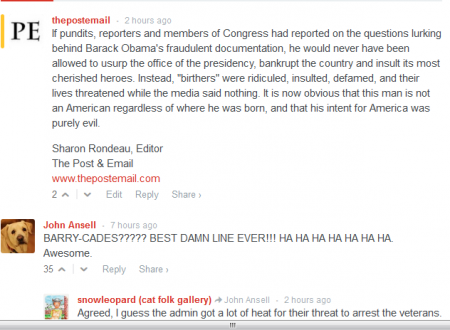