WE’RE GETTING BURNED BY PHONY SCIENCE AND AUTHORITARIAN POWER GRABS

(Jul. 22, 2013) — During this hot, wet summer, a “national climate expert” recently told Delawareans that they can expect even hotter summers – with a climate like Savannah, Georgia’s – by the end of the century.  The culprit, naturally: runaway global warming.

Savannah residents are long accustomed to their climate and, thanks to air conditioning and other modern technologies, are better able to deal with the heat and humidity. Nevertheless, the impact on Delaware will be disastrous, Dr. Katherine Hayhoe claims. Nonsense.

Her forthcoming report promises to be no different than other proclamations that persistently predict dire consequences from climate change – and then present taxpayers with a hefty bill. In this scenario, the State’s Department of Natural Resources and Environmental Control (DNREC) paid $46,000 for her report, presumably to suggest that “independent scholars” support the state’s positions.

The preliminary release of her report reads like the script from a bad disaster movie – think The Day After Tomorrow and An Inconvenient Truth. Like them, it also plays fast and loose with the facts.

It fails to mention the extreme cold that many places around the globe experienced recently. Europe and Russia in particular suffered through bitter cold the past two winters. The report likewise ignores the fact that average global temperatures have not risen at all over the last sixteen years; in fact, Earth has actually cooled slightly during the past decade.

For its really scary worst-case scenario, Dr. Hayhoe says Delaware’s temperatures will rise astronomically in coming decades: with more than two full months of endless days above 95°F and a hundred-fold increase in days with temperatures at or above 100°F by 2100. “Trends to more extreme highs and fewer extreme lows already are apparent,” Dr. Hayhoe asserts. Except they are not.

Data from 970 weather stations across the United States reveal that more record daily maximum air temperatures were set in the 1930s than in any recent decade, and no increase in frequency of higher temperatures has been observed since 1955. The Delaware State Climatologist examined New Castle County Airport records in Wilmington and found no long-term trend in either the total number of days or the number of consecutive days with maximum air temperature above 90°F.

The same can be said for days where temperatures remain below freezing.

Globally, daytime high temperatures do not show significant warming – and most of the warming that has been observed is confined to nighttime low temperatures. Nighttime lows are driven by turbulence (or lack thereof) near the surface, not by the accumulation of energy related to CO2 warming of the deep atmosphere.

As for precipitation, Dr. Hayhoe claims that both floods and droughts will increase, with “more rain arriving as heavy downpours, and more dry periods in between.” This assertion was dispelled in a recent Intergovernmental Panel on Climate Change report on extreme events, released last summer.

The IPCC report concluded that “in some regions droughts have become less frequent, less intense or shorter; for example in central North America.” Similarly, the National Oceanographic and Atmospheric Administration has produced plots that show which parts of the United States are classified as moderate to extreme for dryness and wetness. While both conditions show considerable variability, neither exhibits a significant trend. NOAA also concludes that snowfall records show no long-term trend, and recent record snowfalls are the result of natural variability.

Why should Delaware’s or the nation’s future be any different than the past fifty years of increasing carbon dioxide concentrations? Dr. Hayhoe’s bases her extreme scenarios on climate models – the same models that have predicted major temperature trends that have not materialized; greatly exaggerated short-term trends in rainfall, droughts and violent storms; and failed to predict the lack of warming since 1998. So why should we believe them now?

The real reason behind this report is to provide the State with the justification to enact draconian measures to control Delawareans’ energy use and provide major subsidies for “alternative” and “renewable” energy projects. Delaware Secretary of the Environment and Energy Collin O’Mara says, “We need to make sure we have good science driving our decision-making in the years to come.” Apparently, $46,000 has bought the State precisely the “science” he wanted to hear.

O’Mara came to Delaware in 2009, as part of Governor Markell’s administration. Billed as “the youngest state cabinet official in the nation,” O’Mara is a self-proclaimed climate-change and energy “entrepreneur.” During his tenure in Delaware, he has spearheaded the administration’s efforts on “climate change mitigation,” renewable energy subsidies and “sustainable development.”

During the last 4-1/2 years, the Markell Administration has “invested” in Fisker Automotive, leaving the State’s citizens on the hook to pay for an automobile assembly plant that has created zero new jobs and produced zero cars.

Bloom Energy, which hails from the same town as O’Mara (San Jose, CA), has also been the happy beneficiary of enormous State subsidies and exceptions from environmental regulations. Delaware now labels natural gas as a renewable resource, for example – but only if it is burned in a Bloom fuel cell. This enables the State to funnel taxpayer and ratepayer money from renewable energy credits to Bloom. To top it off, if the State ever decides to renege on the deal, the legislation requires that the State immediately pay Bloom twenty years worth of profits.

O’Mara has also been busy with rule-making by executive fiat. Without any public discussion or debate, and without any vote by the State legislature, O’Mara signed into law new “green” energy standards that make the First State’s emission rules even more stringent than Federal regulations, via a clever process known as prospective incorporation. Through this, all provisions from the California Code of Regulations are automatically “updated,” to ensure that Delaware’s Code is consistent with California’s.

That means any changes to the California Code implemented by the most environmentally dogmatic, job-killing and bankrupt state in the Union are immediately and completely binding via Delaware regulations.  With no presentation to the people, no discussion or vote by the General Assembly, and not even any case-by-case intervention by Delaware’s executive branch, California regulations are automatically the law in Delaware. With the stroke of the pen, Delaware has surrendered its sovereignty to California.

Armed with this new “scientific” report, what draconian measures might Mr. O’Mara and the Markell Administration have in store for the citizens of Delaware? Time alone will tell. However, given their track record thus far, Delawareans are going to get burned – and not by global warming.

Even worse, the same sneaky shenanigans are being played out in other states, in Washington, and all over the world, through the UN, EU and environmentalist pressure groups – in the name of saving the planet from computer model and horror movie disasters. These are bigger power grabs than anything King George III tried. We the People need to take notice, and take action.

___________
Driessen is senior policy analyst for the Committee For A Constructive Tomorrow (CFACT) and author of Eco-Imperialism: Green power, black death (Merril Press, 2012). David Legates is a Professor of Climatology at the University of Delaware and has studied climate change for thirty years.

The following graph could be included with the article, to illustrate its key points about global temperatures and computer models. 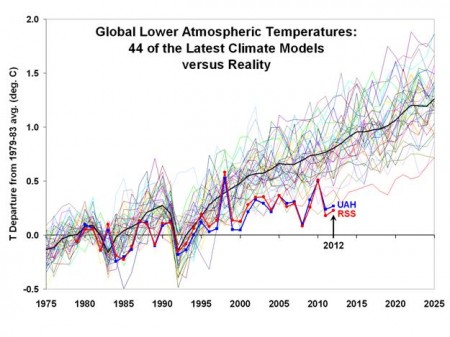 The multiple light-colored lines track projections of mean global temperature for the lower Troposphere by 44 climate models. The dark black line is the 44-computer-model average, which is what the UN’s Intergovernmental Panel on Climate Change (IPCC) uses as its best estimate of predicted “catastrophic manmade global warming.” The two brightly colored lines represent the actual satellite temperature records measured by the University of Alabama-Huntsville (UAH – blue) and Remote Sensing System (RSS – red). These two lines demonstrate that actual planetary temperatures are far below what IPCC models predict. http://www.drroyspencer.com/2013/04/global-warming-slowdown-the-view-from-space/