Look to Chicago, to his ‘nest’. And to Harlem, to his choice of Red Rooster Restaurant for his March 2011 DNC fundraiser.

Nesting or Red-Rooster-ing, Obama’s Memory Lanes are saturated with memories of Malcolm X.

To paraphrase a popular axiom, our nest is where our heart is. For Obama, since 2005, his nest is 5046 South Greenwood Avenue, Chicago, IL.

Though the structure is indeed stunning, 5046 South Greenwood means a lot more to Barack Obama than just grand architecture.

It’s the closest he could possibly come, to surrounding himself with memories of his beloved lost father, Malcolm X. How?

Architecturally speaking, 5046 South Greenwood Avenue, Chicago IL is a grandiose version of the home Malcolm and his family occupied until the week before Malcolm’s death.

Both homes are brick with a center entrance and central front dormer.  Both sport a hip roof.  Twin windows flank the front door. Above the front, on the second level, are two adjacent windows. 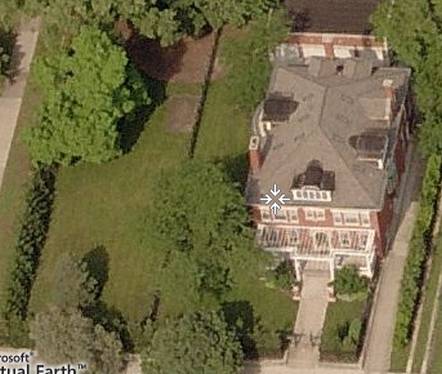 And that’s not all. The architectural style of Obama’s home is Georgian Revival.  Malcolm’s father Earley [Obama’s biological grandfather] is from Reynolds, Georgia. So are Earley’s two sisters, with whom Malcolm lived in Boston in the early forties, following his mother’s institutionalization.

If style and looks are not enough to make Obama feel close to his long lost father, how about this?

His home’s environs connect Obama with the happiest years of Malcolm’s life.

5335 South Greenwood Avenue, Chicago was also, for years, the site of the annual Nation of Islam Saviour’s Day Convention – an event much cherished by Malcolm.

Oh, the memories! Malcolm, devotedly sitting at the feet of his idol, The Honorable Elijah Muhammad, studying the Muslim faith, doing his best to impress Elijah with his talent, dedication, and promise.

Oh, the memories! Malcolm, enthusiastically coming from and going to NOI Headquarters from Harlem, from any and all of the many cities to which he traveled, on behalf of NOI.  Malcolm, touted by The Honorable Elijah Muhammad as NOI’s National Spokesman. [Obama’s Dad, a national figure!]  Malcolm, for many years, regarded as Elijah’s favorite ‘son’ – so much so that reportedly Elijah’s sons envied Malcolm’s relationship with their father.

What memories. What family ties. What professional roots. What a place for Obama to nest. To rest his weary head.

And when Obama’s not resting, Malcolm’s history is mere moments away! By car, what with the one way traffic, it’s only .56 miles from Obama’s house to Elijah’s former home / NOI headquarters / NOI Mosque No.2.

But, as the crow flies, or the foot treads – it’s only a block and a half! A lovely stroll, at any time of year.

Perhaps, during his frequent visits to Chicago, Malcolm strolled or drove by 5046 South Greenwood? Perhaps he admired the stately home, noting its similarities with his modest East Elmhurst home.

Perhaps it was Malcolm’s dream house.

Do you think Obama chose Chicago – or this home – lightly?

Obama’s nesting choice is not the only indicator of ‘where he comes from’ – and who he yearns for.  Consider this sample page from his Power Place Playbook: his choice of fundraising venue at Harlem’s Red Rooster Restaurant, 29 March 2011. http://www.huffingtonpost.com/2011/03/16/obama-red-rooster_n_836684.html

It’s classic Obama, ever in search of connectivity with his father.

Because we’ve got so many Malcolm memories around Red Rooster to explore, let’s not spend much time on the date of the Harlem fundraiser. How important can it be, that on 29 March 1964, at Harlem’s Audubon Ballroom, Malcolm first delivered perhaps his most famous speech – “The Ballot Or The Bullet”?? http://www.vlib.us/amdocs/texts/malcolmx0364.html

It can’t be that important, can it? Let’s focus on the restaurant. 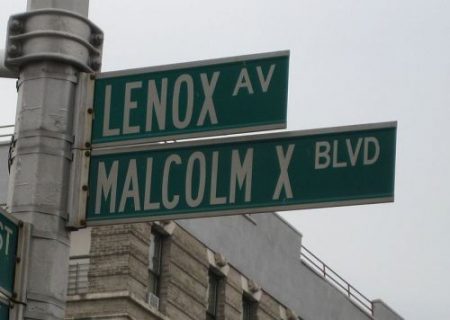 If you didn’t know about his bio-psycho-emotional ties to Malcolm X, you couldn’t know how warm-and-goosey this neighborhood feels to a man like Barack.

But once you do, you’ll know how right at home he feels there. And why he chose Red Rooster.

It’s not just that its chef was the guy Obama called in to cater his first State Dinner in 2009.

Why else would New York City rename this major thoroughfare in Malcolm’s honor?

But enough digressing. We must get back to Red Rooster! After all, Obama’s heading up a power-packed DNC fundraiser luncheon. Who wants to miss it? So let’s imagine that day. Imagine yourself seated there. Perhaps you’re lucky enough to have a window seat.

If so, you’ll be able to see the famous corner of 125th and Lenox, where, in April 1957,  “police intervened in a scuffle between a man and woman at 125th Street and Lenox Avenue” http://www.malcolmxbio.com/node/15. That night, Minister Malcolm stepped into power in the white world, by stepping in to successfully defend the rights of Brother Johnson Hinton [a member of Malcolm’s Mosque] in a case of police brutality.

[We all remember Obama’s famous declaration about the Cambridge Police, now don’t we? He doesn’t know the facts, but he does know that “the police acted stupidly”.]

Stretch your neck to look a bit farther down Lenox, you’ll access another, earlier lesson in Malcolm X’s history. It’s Malcolm’s old hangout! The Paradise Bar at Lenox Lounge, 288 Lenox Avenue, between 124th and 125th.  http://www.lenoxlounge.com/history.html   Packed with memories of Malcolm,  it’s where “he hangs out and begins running numbers” prior to his arrest and imprisonment.    http://www.movie-locations.com/movies/m/malcolmx.html

But we must return to the luncheon, mustn’t we? Back to the restaurant. Cross 125th again, and mind your manners. You mustn’t be distracted by scenes from movies, like that powerful scene in Spike Lee’s Malcolm X. Forget about Malcolm and his followers, triumphantly marching from the police station to the hospital after Malcolm secured the release of Brother Johnson Hinton. Forget it was filmed on West 125th Street – right by the Apollo Theater!  Apollo Theater, 253 West 125th Street, Malcolm’s frequent podium. The site of so much historical ‘family’ achievment for Obama. Apollo Theater – purchased after Malcolm’s death and revitalized by Malcolm’s loyal lawyer, Percy Sutton.

Honestly, with all this excitement,  how could you – or Obama – eat a bite?

Good thing you didn’t follow your fancy along 125th. You’d never hear a word at the luncheon! You wouldn’t even have time to nibble the sumptuous food.  For enroute to the Apollo Theater, at the corner of 125th and 7th Avenue [the next cross street over from Lenox], stands the Hotel Theresa – now the Theresa Towers.

Known as The Waldorf of Harlem, Hotel Theresa was Malcolm’s favorite hotel – so much so that it was the site of Malcolm’s headquarters for his Muslim Mosque, Inc. and Organization of African American Unity, once he split with Nation Of Islam. It’s also the hotel where Malcolm facilitated accommodations for Fidel Castro and his entourage when, in September 1960, they came to New York City to attend The United Nations General Assembly.

And we all know how Obama feels about ‘historical’.

But let’s not let Obama’s obsession with ‘making history’ distract us.

Oh dear, with all our sight-seeing, the luncheon is over.

It’s 2 PM already!  Obama is off to attend to the rest of his [public] New York agenda. A stop at The American Museum Of Natural History, where Malcolm “tentatively enjoys a first date with [his future wife] Betty Shabazz” http://www.movie-locations.com/movies/m/malcolmx.html#lenox

Then on to The United Nations: Malcolm X’s High Court. The body to whose attention Malcolm passionately believed America’s racial injustices should be brought forth – and punished.

Only the driver and Secret Service know what Obama emoted that fine March 2011 day. Did Malcolm’s son weep tears of joy, as he cruised that sweeping avenue – Lenox Avenue when Malcolm cruised it, which now bears his name as well? From his stately limo, did Obama drink in the sights and sounds, imagining his father behind a wheel, or striding along a sidewalk, or standing on a corner, rousingly speaking to crowds?

Enroute or after lunch, did The Presidential Entourage cruise past Marcus Garvey Memorial Park, just one block over from Red Rooster? Obama’s paternal grandparents, Earl and Louise Little, met and fell in love at a Garvey event.

Did they dare cruise by the site of much glory – and such tragedy – for Malcolm: the Audubon Ballroom?

Malcolm, Malcolm, everywhere! Making it oh so easy for Barack to connect with his beloved, long lost father.

A day doesn’t get any better than this, does it, for the son who carries forth Dreams From His Father? What stirrings, what self-pride Obama must have felt, driven along the streets of New York City, protected, esteemed, pampered, in great pomp and circumstance.

“Hey, Dad,” I hear Obama silently say, from deep in the belly of The Beast. “Are you proud of me yet?”

Once you understand where Barack Obama really comes from, Truth is, he is the most transparent President in American History. In his behavior, The Boy Who Would Be Wanted [And Loved And Valued] by his father is tragically transparent.

For those of you who are literary buffs – as is Obama – don’t miss the symbolic power of the restaurant name!

Rooster: an evocative echoing of another of Malcolm’s ever-living statements: “It’s a case of the chickens coming home to roost.” This public statement on President John F. Kennedy’s assassination cost him his cherished professional position in Nation Of Islam.