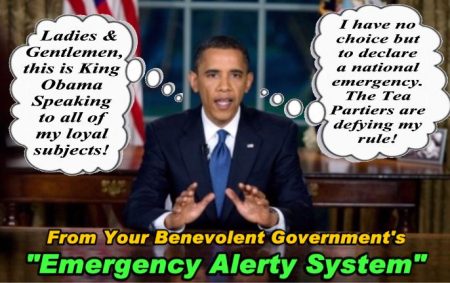 “Good evening, ladies and gentlemen, this is your President, Barack Hussein Obama, speaking to you on a very serious matter.  I am coming to you on the newly established Emergency Alert System (ESA) that pre-empts all of radio, TV, cable and satellite networks and Internet communications so that your President can speak directly to all Americans at one time, on issues of national importance.  I and I alone have the authority to determine what is a national emergency and I and I alone can shut down all forms of communication and speak to you from my thr….I mean the Oval Office.”

“It has come to my attention that the Tea Party movement and those who belong to Tea Party groups, along with rural landowners, are working against my policies and my rule and thus I have declared a national emergency to expunge this seditious movement from the ranks of compliant and obedient American citizens.  Today, I have issued an executive order that declares all Tea Party members, or those who support the Tea Party with their donations, along with all rural landowners, as domestic terrorists and anarchists, subject to immediate arrest by all law enforcement officers and shot on sight if they resist.  Those that survive will be incarcerated in the FEMA camps that we have established for this purpose and will receive no constitutional protections.  These seditious radicals will be held without bail indefinitely and I have suspended their right of habeas corpus.  President Lincoln got away with it.  So can I!”

“If you see or know of a Tea Party member, you are required by my Executive Order No. 4333329576 to turn them into your local law enforcement.  Not only that, it is your patriotic duty to do so.  We are also calling on all of the “Occupy Wall Street” groups to do their part in getting these scoundrels off the streets and out of my hair.  But I must warn you.   Do not try to apprehend these criminals yourself.  They will in all likelihood be carrying their bible, a rifle, a handgun and survival supplies.  They are to be considered armed and dangerous.  Take all appropriate precautions.”

“Until next time my loyal Americans, when once again I will be compelled to declare another national emergency and address you from the National Emergency Alert System, be strong, be brave, be faithful, be loyal and obey my rule without question, or you might just suffer the fate of the Tea Party.”

“THIS HAS BEEN A SPECIAL BROADCAST FROM THE PRESIDENT OF THE UNITED STATES ON THE NATIONAL EMERGENCY ALERT SYSTEM.  WE NOW RETURN YOU TO YOUR REGULARLY SCHEDULED PROGRAMMING.”

Don’t think for one minute that the above scenario is impossible and couldn’t happen in America.  Something quite similar happened just a few years after the ink was barely dry on the Constitution.   In 1798, President John Adams signed into law the “Alien and Sedition Acts“.  From history we learn that:

“The Alien and Sedition Acts were four bills passed in 1798 by the Federalists in the 5th United States Congress in the aftermath of the French Revolution’s reign of terror and during an undeclared naval war with France, later known as the Quasi-War.  The acts were signed into law by then President John Adams.  Opposition to Federalists among Democratic-Republicans reached new heights at this time since the Democratic-Republicans had supported France.  Some even seemed to want an event similar to the French Revolution to come to America to overthrow the Federalists. When Democratic-Republicans in some states refused to enforce federal laws, and even threatened possible rebellion, Federalists threatened to send in an army and force them to capitulate.  As the paranoia sweeping Europe was bleeding over into America, calls for secession reached unparalleled heights, and America seemed ready to rip itself apart.  Some of this was seen by Federalists as having been caused by French and French-sympathizing immigrants.  The acts were thus meant to guard against this real threat of anarchy. Democratic-Republicans denounced them as being both unconstitutional and designed to stifle criticism of the administration, and as infringing on the right of the states to act in these areas, though they did use them after the 1800 election against Federalists.  They became a major political issue in the elections of 1798 and 1800. They were very controversial in their own day, as they remain to the present day.  Opposition to them resulted in the Virginia and Kentucky Resolutions, authored by Thomas Jefferson and James Madison, which were foundational to the states rights theory that helped lead to the Civil War.”

“The first Nationwide test of the Emergency Alert System will be carried out on November 9, 2011. For more information about the test or access to the participant reporting system, please click here.“

“The FCC, in conjunction with Federal Emergency Management Agency (FEMA) and the National Oceanic and Atmospheric Administration’s National Weather Service (NWS), implements the EAS at the federal level. The President has sole responsibility for determining when the EAS will be activated at the national level, and has delegated this authority to the director of FEMA. FEMA is responsible for implementation of the national-level activation of the EAS, tests, and exercises. The NWS develops emergency weather information to alert the public about imminent dangerous weather conditions.”

“The FCC’s role includes prescribing rules that establish technical standards for the EAS, procedures for EAS participants to follow in the event The EAS is activated, and EAS testing protocols. Additionally, the FCC ensures that the EAS state and local plans developed by industry conform to FCC EAS rules and regulations.”

Sure, it sounds harmless doesn’t it?  Weather information and Amber alerts ….. certainly these would be worthwhile.  But do you have any idea how much power this gives the president?  He alone can declare a national emergency and he alone can activate the EAS and preempt all forms of communication, then address the entire nation on radio and TV broadcasts, cable and satellite networks and the Internet, without the filter of the private media.  You think the Patriot Act was bad?  Just wait until Obama starts using this new power to influence a nation in his 2012 re-election bid.  The opportunities for abuse by any president, are endless.

This President alone already has the power to hit the “KILL” switch on the Internet.  This is scary enough. but the right to shut down all communications and take it over on a presidential whim, is beyond scary.  It could easily be the end of freedom as we know it.  It might even be considered by some, as a non-violent coup d’etat!

The President already can address the nation on all major TV networks.  When he requests the time, the major networks offer it up willingly.  But now, under EAS, all of the networks and any communication facility will be mandated to give up the time on the whim of the President under FCC rules, a federal bureaucracy that falls under the authority of the President.   Obama and the Democrat party must be drooling at the prospects of having an entire nation as a captive audience, whether they like it or not.

Once again, presidential cabinet positions, the Federal Communications Commission and Homeland Security, have increased the power of the presidency exponentially and have done another end-run around Congress.  “The Parallax Prophecies” predicts trumped up national emergencies by the President happening frequently and they could easily increase as we get closer to the November 2012 election.  The temptation to use this new power will overwhelm them and they will succumb.  The Democrat party won’t even have to pay for the air time.

Remember what Obama’s former Fchief of staff, Rahm Emanuel, said, “never let a good crisis go to waste!”  Now they have the power to create any emergency or any crisis, at any time of their choosing and preempt all forms of communication to propagate their party message.  This new power doesn’t just apply to Democrat presidents either.  Republican presidents will also use it.

Since President Wilson, the power of the presidency has increased way beyond the intent of the Founding Fathers and has turned the “Separation of Powers” doctrine on its head.  Ever since FDR declared a national emergency by executive order in response to the Great Depression, the power of the Executive Branch has continued to increase.  FDR’s national emergency executive order has never been rescinded and is in full force and effect today.

Which leads us to the question, at what time along the line of increasing presidential power do we enter the forbidden zone of fascism?  When Mussolini assumed power in Italy in the 1930’s, the people seemed to welcome fascism.  Why?

Ladies and gentlemen, November 9th, 2011 is when the hammer comes down on American freedom.  November 9th, 2011 is when the de facto president of the United States is given absolute power, because the power to address the ENTIRE nation is the power to influence an ENTIRE nation.  It is the bully pulpit on steroids.  The president now has that power and since no individual can resist using the power he or she holds, history tells us that there will be constant and regular abuses of that power.

November 9th, 2011 is a truly sad and tragic day for America.  It is just one more notch in the “gun” that government holds against the heads of its people …. a notch that we may find can only be removed by our last remaining alternative to reclaim our freedom.

If you want to get in the game of resisting this takeover of American freedom, check out the “20-documents to freedom” assembled under our S-O-S Kit.