(Oct. 23, 2011) — If David Brooks at The New York Times feels he was taken for a ‘sap’ by Barack Obama, we shudder to think how everyday Americans will feel, once they find out the Truth.

Obama’s Mother And Son photo was falsified to deceive us.

Recognize it? Yes, that’s the same photo as was used on the cover of Janny Scott’s A Singular Woman, her biography of Stanley Ann Dunham, Obama’s mother.

So what’s the big deal?  In a moment, we’ll tell you. For now, all you need to understand is this:

The photo was falsified to deceive us.

Truth is, mama Stanley Ann didn’t have long hair when Barack was young.  Until, of course, with photoshop-type tampering, The Obama Campaign made sure we’d think that she did.

Here’s a peek into Truth.  All that darkness, making us think we’re seeing long hair, is nothing but graphics illusion: 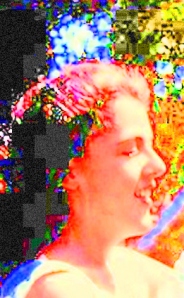 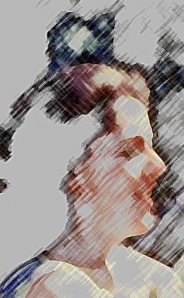 As if the deceit with her hair weren’t insulting enough, in the view below, note the futzing with the corner of her mouth, in order to widen it.  See the [pink] added tooth. Look closely, you’ll see her original top lip line, curving down to the last white tooth – and the fake new lip lines, extending past the fake, pointy, pink tooth … And while you’re looking, don’t miss the fake ‘closed’ eyelid applied to her open eye.

Her nose, we’ll leave for another discussion. 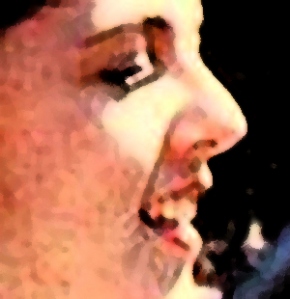 Now, you may be wondering: why does it matter, whether mama’s hair was short or long?  Whether her mouth was narrow or wide?  Or why her eyes seem always half-closed, and hidden?

Here’s why: Obama was worried you’d find her in places, at key strategic times, with people he couldn’t let you know about.

For instance – what if you saw this image?  The image of his mother, Stanley Ann, in February 1965, at the wake / funeral of militant black leader, Malcolm X?

What if you recognized her? 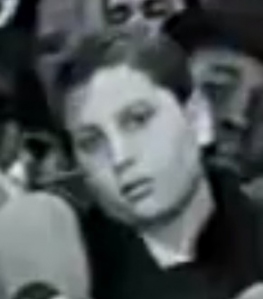 Obama sure as heck wouldn’t want you to view the video in which her image resides:

“Eyewitness To The Assassination”

Why not? Because though he claims his mother was thousands of miles away in Hawaii, the fact is, there Stanley Ann was in New York City, February 1965, there, right there, at Malcolm X’s wake and funeral.

The Truth lies in the long and short of it. Of Stanley Ann’s Hair, that is.

Take a moment to view the video again. As you do, note Stanley Ann’s “habit of tilting her head to one side” as documented in The Telegraph article: http://www.telegraph.co.uk/news/worldnews/barackobama/8534532/Barack-Obamas-mother-the-hidden-influence-on-the-American-president.html

While you’re watching, see if you can’t recognize Stanley Ann’s boyish-looking appearance, and her weight struggle, as noted by Tribune national correspondent Tim Jones:  [http://www.courant.com/technology/chi-0703270151mar27-archive,0,6704277.story ] “Boyish-looking, Stanley Ann … didn’t like her nose, she worried about her weight”.

If you need extra confirmation, take a few moments and study these two youthful photos of Stanley Ann, also released by The Obama Campaign.

In the first image, though her eyelids have also been altered [pulled down, with the skin above them highlighted], her lips extended, and her chin sharpened into a point, take note of the basic shape of her face, her nose and her ears. And don’t miss those eyes, those big, dark, penetrating eyes – which, by the way, also have been altered. 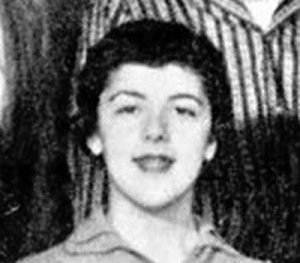 The next photo depicts her mouth more accurately – once you get beyond the tampering that’s been done to her lips [and to her eyes, and big-time to her nose]: 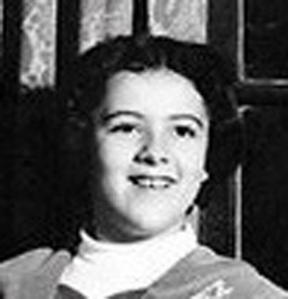 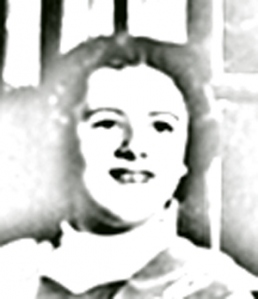 Honestly, have you ever seen a girl with two such mismatched eyes?!

Try as The Obama Campaign did to occlude it, Truth will out, won’t it?   From the “Eyewitness To The Assassination” video: witness Stanley Ann’s grin: 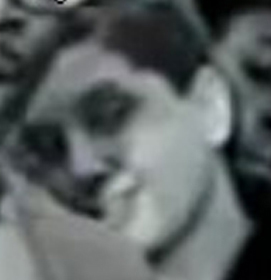 From the Campaign’s own photo, posted above, excusing the efforts to widen her mouth, here’s that same grin:

Did you ever wonder why The Obama Campaign never issued video footage of his mother?  The eyewitness video tells it all: Obama’s mother’s mannerisms and facial tics, as well as the way she moves her mouth, are distinctive, easily recognizable in this Malcolm X funeral footage.

Oh dear. There’s only so much a Campaign can control.

If you’re not yet fed up, and can stand it, study mama’s hairline in official photos. The ‘widow’s peak’ dip on her forehead, to the right of her nose. The idiosyncratic ‘quarter moon’ curve demonstrated in her hairline profile – which by the way can be verified by The Obama Campaign’s official Mother And Son photo, above.

At first, you may not recognize Stanley Ann, with her hair cropped close. Not to worry. After all, The Obama Campaign has spent more than four years convincing us that she had long hair.

Don’t let the image-changers’ drooping her eyelids, or layering false hair, or reshaping her nose and mouth and chin, or casting false shadows or light fool you. The Truth is in her false hair.  And in her eyes – her big, dark, penetrating eyes.

Hey, Time magazine: Are “We All Saps” yet?

In closing, think about this: in the “Eyewitness To The Assassination” video, Stanley Ann, standing beside the speaker, is traumatized. Why?

Because her lover, her idol, the father of her son Barack – Malcolm X – had just been assassinated.

Still don’t believe it’s she? You don’t have to take our word for it.

Malcolm X scholar Manning Marable, in his April 2011 biography, states that Malcolm’s “teenage lover” was seated in the front row at the time of the shooting. The eyewitness in the video states that he was in the front row.  In this footage, mama Stanley Ann stands comfortably at this man’s side.

To make the story steamier: Marable further states that Malcolm’s “teenage lover” had been having an affair with one of his entourage [guards, assistants, etc.] This speaker could be the man to whom Marable refers.

America is starved for answers, ravenous for Truth. America, where the media is more afraid of printing Truth than they are of printing lies.

And why would Obama hide his origins?

Because having a biological father like Malcolm X – a radical black nationalist – would have impeded Obama’s chance for election.

Still not convinced that’s Stanley Ann at Malcolm’s wake? Then answer this: in family photos for a Presidential Campaign, why would a candidate release tampered images of his mother?

Can you give us one solid reason?

And oh, all ye defenders of darkness – in case you’re thinking of flaunting the Riverhead Books version of the Mother And Son photo – the one with the background tastefully tinted grass-green behind her neck, to hide the Truth about her hair – you needn’t bother.  We know all about it.

Editor’s Note:  When we asked the writer, Martha Trowbridge, how she knew that the photo of the woman with very short hair and straight nose was Stanley Ann Dunham, she replied:

The photo is a frame from the video that is embedded. It was filmed during the wake ‘ funeral period of Malcolm X.

ALL the photos of Stanley Ann Dunham have been falsified via a Photoshop-type graphics program. It appears that a prototype of her was created, though when I analyzed photos from various years, the consistency was not maintained.

I’m happy to send you samples of this additional analysis. Not only has false long hair been applied to her ‘image’, her eyes have been reduced in size, and her nose, chin and mouth changed.

So of course, the question is – why?

The answer:  Obama knows there are images of his mother ‘out there’ in the presence of Malcolm X. So, if he consistently put out an image that disguised her actual appearance, most people would not recognize her.And it’s worked until recently. When you have the time and energy to read through that first post,you will find links to articles describing her actual physical appearance and mannerisms – validating that indeed the girl in the video – and the frame – matches the text describing her. One fact reported was how much she hated her nose!

Even the Obots, reading the Saps post, acknowledged that the photos of her were photoshopped! The only counter they immediately had was: it’s a boy.

And it seems they haven’t had much to say since.

Last week an Obot posted something oppositional to my data. In it s/he referred to the difference in distance between eyes, from nose to mouth, etc. in the images presented by The Obama Campaign, and the video image. I responded, stating that it was interesting that the poster knew EXACTLY what changes had been made to her actual appearance.

And guess what? End of discussion by the Obot.

One Response to "Saps, Stool Pigeons And Stanley Ann’s Hair"