“I REFUSE TO ACCEPT THE COMPLICITY OF COWARDS”

(Aug. 5, 2011) — A third criminal complaint of treason has been filed by Walter Francis Fitzpatrick, III with the U.S. Attorney for the Eastern District of Tennessee against Barack Hussein Obama and “Obama’s Criminal Assistants in commission of the crime of treason against the United States of America.”

Other recipients to whom the complaint was directed are Special Agent-in-Charge Richard L. Lambert of the Federal Bureau of Investigation and the two federal grand juries in Knoxville, TN.  The complaint sent to the federal grand juries via the U.S. Attorney was assigned certified mail number 7009 2820 0000 7085 8686, and that which was sent to Lambert was given number 7009 2820 0000 7085 8693.  Fitzpatrick reported that “Both mailings were sealed and marked: “PERSONAL FOR.”

On August 4, 2011, Fitzpatrick reported that he attempted to contact the office of U.S. Attorney William C. Killian in Knoxville and that as soon as he stated his name and that he was recording the phone call, the call was terminated at Killian’s end.  Killian is an Obama appointee.

Two previous complaints of treason were filed by Fitzpatrick and reported here and here.  Fitzpatrick has also suggested the idea of a “Treason Summit” in response to or incorporated into the “Birther Summit” planned for March 28-30, 2012.

The text of the complaint reads:

SUBJECT:  Formal criminal complaint naming Barack Hussein OBAMA and OBAMA’s CRIMINAL ASSISTANTS in commission of the crime of TREASON against the United States of America. 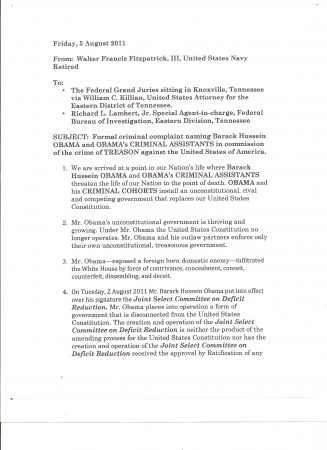 Third Criminal Complaint of Treason Filed Against Obama and His Assistants added on Friday, August 5, 2011