(Apr. 30, 2011) — In March 2010, The Post & Email published Mr. Sweeney’s  analysis of the Certification of Live Birth image posted on the internet in June 2008 purported to be Obama’s “birth certificate.” The form taken from the White House blog is shown in black and white rather than the green background with black letters originally released at The Daily KOS, followed by other websites such as Politifact and Factcheck.org.

Here Mr. Sweeney shares his findings  regarding the image published by the White House on Wednesday, April 27, 2011  “long-form birth certificate” containing more detail than the first document.  However, no paper document has been made available to the public, despite the appearance of a letter from Hawaii Department of Health Director Loretta J. Fuddy stating that two “certified” paper copies were provided to Obama’s attorney, Judith Corley, on Tuesday, April 26.

The White House blog echoed the talking points which Obama had mentioned in his press conference on Wednesday, insisting that the short-form document issued in 2008 “is the birth certificate.”  Communications Director Dan Pfeiffer described Obama’s failure to release his long-form birth certificate as a “fake issue.”

The alleged long-form birth certificate can be found at the White House blog here.

The released document contains multiple images within the PDF file.  Using various Adobe products these layers are simple to detect.  Using Adobe Standard Version 9 the layers can be broken out by going to a) Advanced b) Document Processing c) Export All Images.  When this is done 3 jpg images will be created.  It appears the creators did not ‘flatten’ the image before posting it.  The ‘flattened’ image would have no layers.

A true scan creates a single image and single ‘layer’.  There would be no reason that the process would automatically break apart the image into chucks. Especially into the elements that are present.  There are claims of this being from an Optical Character Recognition (OCR) process at the time of the scan.  These are beyond ridicules.  First – why would it be processed via OCR?  There was no need or reason to? Second, OCR would not ‘break apart’ the images like this.  OCR looks through an image looking for possible characters that map to ASCII characters and they attempts to convert them.  But it does this one character at a time for the overall document.

At least three major elements show up that are obvious red flags:

2)      The X’s in the boxes on 2 of the lines in the Obama LFBC are completely misaligned from the rest of the type on the same line.  No other LFBC certified copies show these phenomena.  None.  The known authentic LFBCs show the X lined up with the text on the same line – as you expect when someone uses a manual typewriter.

There are other signs of forgery but these are the ones that are easy explain to people who are not graphics designers and do not deal with digital images every day. 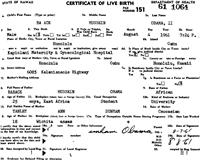 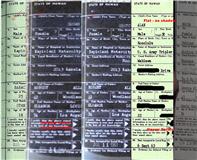 The Centered Fields vs. Typewriter Tabs 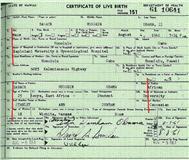 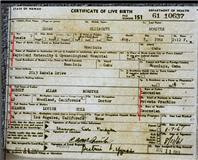 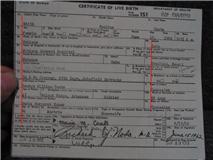 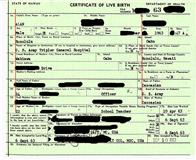 Below is another finding in the image that seems to continue to build the case of forgery:
There is the sign of a ‘raised seal’ in the lower part of the document.  It is supposed to be a deembossed seal that pushes down through the paper on the readable side of the document and it ‘raises’ the back side of the document.  Hawaii stamps this deembossed seal on the back usually.  So usually the seal image is raised and reversed on the front.  The image is so poor here that it is not possible to tell if the seal was supposedly applied to the front or the back.  In any case it did not alter the lettering or lines on the supposedly printed certificate.  They simply go right over where there should be a visible indentation or raising of the paper.  This is yet another sign of fakery.

Many, many people have looked at this image posted by the Administration. The evidence of image manipulation is clear and deserves a response.  The best response would be for the actual document, along with a representative from the State of Hawaii, to be made available for detailed inspection of the document and questioning of its history and background.  Nothing else at this point could possibly stop the firestorm that this Administration has released since Wednesday.  At this point only the physical authentic document and a person to explain the questions is an acceptable response. 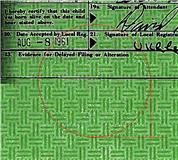 Other investigations include the following:

https://docs.google.com/viewer?a=v&pid=explorer&chrome=true&srcid=0B1eQRJILO2U0ZWUwODM0ZDktZTg2OC00Yzc0LWI4YzAtODBkZWU2YjBhZDU1&hl=en&authkey=CKv6_hg
—————————-
Editor’s Note: Other analyses are here, here, and here.

Update: Guide to What is Wrong (So Far) with the Obama Long-Form Birth Certificate added on Saturday, April 30, 2011

61 Responses to "Update: Guide to What is Wrong (So Far) with the Obama Long-Form Birth Certificate"