WHICH TAKES PRECEDENCE:  A CIVIL OR CRIMINAL CHARGE?

(Mar. 30, 2011) — WorldNetDaily is reporting that an appellate court has scheduled a hearing on the merits of a lawsuit filed by California attorney and dentist Orly Taitz more than two years ago.

The case Wiley Drake v. Obama will be heard by the Ninth Circuit Court of Appeals, according to Taitz, who, in addition to challenging Barack Hussein Obama on his constitutional eligibility to serve as President and Commander-in-Chief, claims that Obama has also lied about his attendance at Columbia University in the early 1980s.

In recent days, entrepreneur and real estate developer Donald Trump has demanded that Obama produce his long-form birth certificate allegedly on file with the Hawaii Department of Health, according to former Hawaii Governor Linda Lingle.   However, the current Hawaii governor has stated that there is no original birth certificate of Obama’s in the Aloha State.

News reports have been changed to reflect differing stories about where Obama was born, and members of the Kenyan Parliament say that he was born there.  Does Hawaii Governor Abercrombie say that Obama has no birth certificate from Hawaii because Obama was actually born in Kenya?  To date, no one has discredited the document which Lucas Smith produced in 2009.

Mr. Lucas Daniel Smith claims that on a trip to Africa in early 2009, he heard from some of the natives that Barack Hussein Obama, the man acting as the U.S. president, had been born in Kenya, not Hawaii.  He stated that he traveled to Kenya from the Congo, bribed hospital personnel to produce a copy of Obama’s birth certificate, and is willing to testify to Congress about it.

A decorated U.S. Army medical doctor is incarcerated at Ft. Leavenworth federal prison for asking if the orders he was receiving through his chain of command which ultimately emanated from Obama were legal.  The military officers who convicted him denied Lt. Col. Terrence Lakin the answers to his questions and have been accused of treason by retired LCDR Walter Francis Fitzpatrick, III.

Barack Hussein Obama claims he was born in Hawaii but has never produced official documentation bearing the signature of a doctor or nurse attesting to having assisted at the birth.  No one has come forward to commemorate the event in Hawaii. Neither Queens Medical Center nor the Kapiolani Medical Center in Honolulu has claimed to be his birthplace. 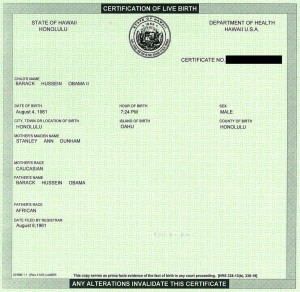 Also today, The Post & Email has been told that radio show host Doug Urbanski discussed the incarcerations of both Lt. Col. Lakin and LCDR Walter Fitzpatrick on his nationally-broadcast show.

Lakin was sentenced to six months in Ft. Leavenworth, forfeiture of pay and discharge from the U.S. Army after questioning Obama’s eligibility.  Fitzpatrick was jailed on October 27, 2010 after local sheriff’s department deputies broke down his door, tasered and beat him, then took him to the county detention facility for allegedly failing to appear at a hearing regarding his attorney of record.  Fitzpatrick had originally asked that the county grand jury evaluate his charge of treason against Obama.

The Post & Email was informed that Urbanski did not denigrate either Lakin or Fitzpatrick, but rather, had attempted to shed light on two men who went to jail as a result of their respective actions relative to Obama.

Of the national broadcast, Fitzpatrick said, “This is a new development.  It’s the first time Lt. Col. Lakin’s case or mine has  received national coverage.  Something’s happening here.  Tomorrow’s another day.”  Fitzpatrick contacted Urbanski’s producer, who reportedly was surprised that one of the subjects of Urbanski’s show, which was still in progress, had called in.  Fitzpatrick stated that the producer took down his contact information and promised to get back to him.

Urbanski took over as host of the radio program when former Senator and presidential candidate Fred Thompson departed at the beginning of this year.

Fitzpatrick has filed a second treason complaint against Obama, as have several thousand U.S. citizens.

On March 21, Mr. Fitzpatrick was the featured guest on the Terry Lakin Action Fund radio program, designed to bring attention to Lt. Col. Lakin’s plight and to assist his family financially while he serves his prison sentence.

A civil complaint has been described, in part, as:

A civil complaint initiates a civil lawsuit by setting forth for the court a claim for relief from damages caused, or wrongful conduct engaged in, by the defendant. The complaint outlines all of the plaintiff’s theories of relief, or causes of action (e.g., negligence, battery, assault), and the facts supporting each cause of action. The complaint also serves as notice to the defendant that legal action is underway. The Federal Rules of Civil Procedure govern construction of complaints filed in federal courts. Many state courts follow the same rules as the federal courts, or similar rules…

A criminal complaint is defined as:

A criminal complaint charges the person named or an unknown person with a particular offense. For example, after the bombing of a federal building in Oklahoma City in 1995, authorities issued a John Doe complaint, charging an unknown person or persons with the crime.

Are the facts supported by probable cause?  If so, the above definition states that an arrest warrant will be issued.

Fitzpatrick has stated that a criminal charge takes precedence over a civil suit.

How many criminal complaints could be filed before May 2?

How many people will be charged with treason against the U.S. Constitution?

And how about the U.S. Supreme Court for “evading the issue?”

Perhaps they will change places with Lt. Col. Lakin.

Civil Case Against Obama Scheduled for Oral Arguments on May 2 added on Wednesday, March 30, 2011