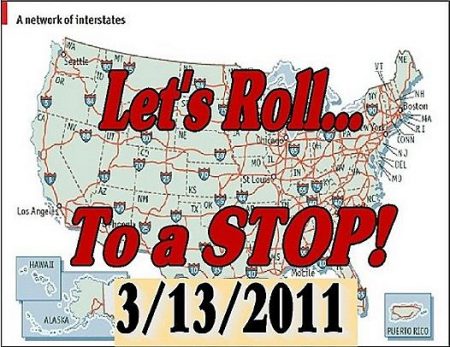 (Mar. 10, 2011) — SUA is promoting this effort for people to express their outrage. To vent in a manner that cannot be overlooked by anyone! This first wave of action is something the people can really grasp, and in no way shape or form does it condone any ill-action, rather, its about civility, and its akin to a sit-in. You can take it for anything you wish, but it is in our educational directive and charter that SUA wants America to observe, learn, and understand that the time is now for action.

Brief Description – Sarah Palin called the Obama Administration’s actions as the “Road to Ruin”! Like most of the USA now, we at Stand Up America think it is a great way to express yourself and learn what is really happening to our country, so what can we do? Well, it seems the normal methods do not work because of entrenched political machinery, moneyed interests, power seeking for power’s sake, and a media that is just plan in the tank.

In the past, petitions were signed, marches on Washington and elsewhere were held, Tea Parties were created, letters were written, calls were made, new representatives were elected, yet, the road to ruin is still there, and the Obama Administration has the pedal to the floor, the speedometer is pegged, and there are no brakes. All our efforts have for the most part FAILED!

So how do we make our voices known? How do we finally succeed? How do we send a clear message that cannot be twisted by the media, misinterpreted by politicians, or co-opted by Obama apologists? Well, we have come up with one interesting new way. Are you game? It won’t cost you any money short of a gallon of gas. It won’t take much of your time, only about an hour. It won’t mean travel to distant cities. It won’t mean crowds to wade through, and it won’t interfere with your life too much.

What it will be is FUN, and a great way to vent your frustration, without being labeled, or maligned!

Here is what is planned:

• We want everyone to get into their cars, trucks, motorcycles, RVs, Semis, box trucks, and any other vehicle, and drive to your nearest highway or main route;

• Don’t go far, just enough to get in a safe position to pull over to the shoulder, and park, engine running, headlights and flashers on;

• Why? To take a cell call, or make one or several. After all, law enforcement recommends that you pull over to the side to take your call or text.

• Hook up a boat trailer, a snow mobile hauler, or anything to make the line look miles and miles long, bring your tractor-trailer;

• Set up a long motorcycle run to a STOP;

• Get your car club involved to show off those great hot rods and collectibles;

• Imagine others driving by wondering “what the heck”? Wave to everyone;

• Get ten friends to do the same; or go to an over pass and hang temporary signs saying – “Time to stop!” Just imagine the imagery! But be SAFE!

• Once pulled over to the side, place calls or texts to your friends, take pictures, send tweets, flood Facebook with messages and photos, along with several million others on other highways across the land.

• Stay one hour if you can, get your friends to do the same, line up all your vehicles in a safe manner as far off the side as you can, and hit your horns.

• One hour gives the media a chance to react, a chance to get footage. Imagine the traffic reports!

• Hang a sign inside your back window, or use temporary soap to write a message safely on the window;

• Be a part of millions of people saying: “Stop the madness, we are pulling over and just stopping!”

Imagine the image, when every news outlet in the USA must take notice.

Helicopters recording the event, YouTube filling with videos from every spot in America, with one message: “Just Stop”! Imagine seeing 300 cars pulled over for miles in California, in Texas, in New Jersey…etc.

Imagine the evening news and cable stations saying, “What the heck is going on?”

Do the math. If a car is 17 feet long, and 10 feet is maintained between each vehicle, it takes only 195 cars to stretch one mile. Imagine 500 tractor trailers pulling over for one hour! That’s over seven miles!

• Be respectful, and patriotic to a fault;

• Stay away from congested areas, you know where they are, do some research;

• Leave plenty of room so you can pull back out safely, in turn, one-at-a-time;

• Help each other when stopping or starting back out into traffic lanes;

• Be courteous to your fellow “Stoppers”;

• Do not do anything illegal, and do not get out and walk, Observe and obey all laws;

• Don’t cause any interference with the flow of traffic;

• Do not disobey any lawful order;

• Be the PATRIOTIC icon of virtue that you are!

We are on the “Road to Ruin”, and we are stopping on the side of that road to protest the downfall of our country!

We are not going to drive on that road anymore!

Stand Up America does not condone breaking any laws, period! If its illegal, DO NOT DO IT! However, if you wish to participate in an event such as this, we suggest you consult local ordinances, and find out if you can demonstrate your opinion in this fashion.

Disclaimer: We have stated from the start, that if it is illegal do not do it, if you are uncomfortable with it, don’t do it, but it is not illegal to pull off to the shoulder of a highway to attend to any emergency you may have, or for any reason you feel you cannot continue to operate safely in a travel lane!

Find the best place for you, no one is telling you where, find out for yourself.

Ostensibly, you are not supposed to pull to the shoulder of a super highway for anything other than an emergency, a breakdown, or any other issue that prevents safe operation in the travel lanes. However, after consulting California Highway Patrol officers, they did say, if ordered to move along, you must obey or face arrest, but they are not going to arrest you for pulling over alone!

It does not have to be a freeway with limited access, it can be a State Route, or main thoroughfare, or any place you wish to make your statement. Its your choice, and yours alone.

Its called ‘civil disobedience’ only after you fail to comply with a legal order from a police officer. Prior to that, it is just you pulling over for a reason you deem necessary.

20Turns is the cosponsor of this event.  Contributor Sher Zieve reported on the event previously here.

Let’s Roll to a Stop, Obama, Road to Ruin, Stand Up America