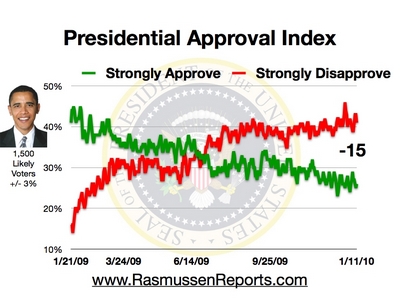 (Jan. 12, 2010) — The Post & Email predicts that an Orange Revolution will break out in the United States by July 2011 seeking the ousting of Barack Hussein Obama from power and sweeping his Democrat supporters in the federal government into prison.

Since his unconstitutional inauguration, more and more U.S. citizens have become aware of his ineligibility to hold the office, and outrage and anger have spread throughout the nation and all social classes at Obama’s numerous decisions which have demeaned, denigrated, and dishonored the nation on the world stage.

In the last 12 months, Obama’s presidential tracking poll for January 11, published by Rasmussen yesterday, has indicated that those who strongly support him have fallen from 41% of the general population to 26%, a decline of 15%.  At that rate, his support should erode by July of 2011.  Rasmussen has seemingly been putting out polls since mid-December reversing Obama’s declines, even though the passage of the Health Care “Reform” Bill has incited widespread unrest throughout the country.

Therefore, The Post & Email concludes that such a revolution will break out spontaneously by July of 2011.

Since Obama does not hold the office constitutionally and his installation in said office was a collaborative effort of the entire U.S. Congress and Supreme Court, it follows that the American people are no longer obliged in law to either show allegiance or pay taxes to the federal government, which has thereby cut all ties it had to its own legitimacy.

An Orange Revolution, it must be noted, is a peaceful act whereby the citizens of their country restore constitutional governance following an illegal or fraudulent election.

Obama is a usurper in the office of president because he is not a natural born citizen, according to the U.S. Supreme Court’s definition; as such, he does not meet the requirements for the office of President as laid out by the U.S. Constitution in Article II, Section i, Clause 5.